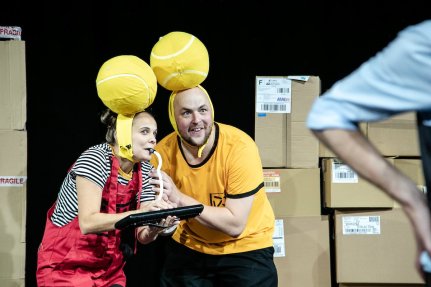 Kafka? For kids? Really? It doesn’t sound like a goer, to be honest. But – it turns out – Kafka can indeed be repurposed for kids, and rendered funny and entertaining for adults too.

I’m vaguely familiar with Kafka’s work. I first encountered Die Verwandlung while studying for a degree in German literature, and then – during a second degree course, this time in theatre studies – met up with its English translation (Metamorphosis) via Berkoff’s infamous production. I’ve read The Trial, too, and The Castle, but not recently; in short, I know just about enough to be sure that Beetlemania: Kafka for Kids will have to pull something rather special out of the bag if it is to hit its mark. And does it? Oh yes, it really does.

The show is a delight from start to finish, the deceptive simplicity of the knockabout comedy concealing some clever structural stuff, and layered references to Kafka’s obsessions and stylistic tics. It’s all there: humanity-crushing bureaucracy, alienation, despair. There’s poverty too, and hope – and much absurdity. And, in Tom Parry (he of Pappy’s fame)’s script, it all comes together to make a genuinely funny and illustrative hour of fun – for all the family.

Parry stars in the show as well, as Karl, the hapless entertainer who’s inadvertently robbed a Royal Mail van, the contents of which serve as makeshift set and props. He’s joined by Will Adamsdale, who plays the troupe’s frustrated leader, Karter, and Heidi Niemi (Kat), who speaks Finnish throughout. The trio are interrupted, intermittently, by the marvellous Rose Robinson (last seen by Bouquets & Brickbats in Great British Mysteries: 1599? earlier this week), who plays a series of officious bureaucrats, each one more demanding than the last.

We’re introduced to miserable tales, where Poseidon is crushed by the weight of his paperwork, where a bridge loses faith in its ability to connect. We’re drawn in, made accomplices; we tell lies to officials to protect the performers. The kids in the audience are utterly enthralled. We don’t have any kids with us, but we are entranced too.

It’s a rainy day, so numbers are down; it’s a shame to see so many empty seats when the material is as good as this. Any families out there looking for something quirky, something different – I urge you to give this a go.