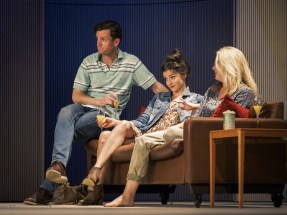 Tom Stoppard’s The Real Thing is an arch examination of what we mean by ‘truth’ – in love, in life and, of course, in theatre. Despite the linguistic flourishes, however, the central premise – that reality is a shape-shifter, subject to narrative perspective – is pretty bluntly hammered home.

It starts well, with the initial confrontation between husband and wife slowly exposed as fiction: a scene from playwright Henry (Laurence Fox)’s House of Cards. The blurred lines between reality and fantasy are underscored by the revelation that Charlotte (Rebecca Johnson), the cheating wife in the first scene, is – in fact – married to Henry. Her on-stage husband, Max (Adam Jackson-Smith), visits with his real-life wife, Annie (Flora Spencer-Longhurst), and things are further complicated when we discover that Henry and Annie are having an affair. It’s the stuff that farce is made of, and it’s rather nicely done – even if it does at times seem a little too wordy and pleased with itself.

But I’m not sure we need the constant reinforcement of what is, at heart, a straightforward idea. Henry’s Desert Island Discs choices don’t reflect his real musical taste; Charlotte has never been a faithful wife. Brodie (Santino Smith), Annie’s ‘good-cause’, is not the wronged war hero she pretends he is. Most of Billy (Kit Young)’s dialogue is taken from ‘Tis Pity She’s a Whore: he’s rehearsing with Annie; they’re acting the part. It’s all very meta, and interesting to watch, but it does seem to over-complicate an essentially simple premise.

Henry and Charlotte’s daughter, Debbie, is nicely played by Venice Van Someren, but I really don’t understand the character’s function. The role doesn’t add anything to the piece.

The performances are good: the play is dialogue-heavy, but the actors make the most of the sprightly humour, and the verbal jousting is entertaining throughout. Fox’s voice seems a little strained at times, but he plays the part with relish and, particularly in the second act, imbues Henry with real depth.

Stephen Unwin’s direction is clear and unfussy, each scene separated by a choreography of moving furniture, which serves to underline the theatricality. But I think perhaps more layers might have been unearthed had the actors multi-rolled, further calling into question the whole notion of reality. As it is, it’s all a bit one-note, and something of a missed opportunity.