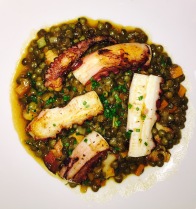 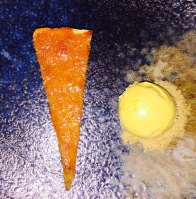 Edinburgh boasts a wealth of fine dining venues and Hotel du Vin, part of the Malmaison group, has been around since 2006. It also has a more fascinating history than some of the competition. Back in the day it was known as ‘Bedlam,’ the city’s biggest lunatic asylum. (The poet Robert Ferguson was one of its most celebrated inmates.) These days, of course, it’s all a bit more sedate, with a pleasant rustic feel, though that colourful history is commemorated in a private dining room which boasts a spectacular mural featuring two of Edinburgh’s most infamous inhabitants, Burke and Hare.

We first ate at Hotel du Vin back in the day, when we were first discovering the city, but long before we started reviewing our dining experiences. We have family visiting, so we decide to revisit the place, taking advantage of a bookatable deal that offers three courses and a glass of wine for just £20.95 per head.

For starters, Susan and I both opt for the seared Galician octopus, which is a rather splendid affair, succulent fishy tentacles resting on a bed of inky braised lentils with salsa verde. It’s rich and savoury and a great appetiser. There’s also Woodhall’s family black combe air-dried ham (looks fab but doesn’t photograph well) and a watercress and spinach soup, which is served with a poached egg and a dollop of sour cream. All of these are sampled and all are pronounced utterly delicious.

For her main course, Susan tries the Normandy chicken cobb salad, a beautifully arranged dish featuring tangy Roquefort cheese, avocado, tomatoes, brioche croutons, soft boiled eggs and pancetta. It looks and tastes absolutely splendid. I’m in a ‘gromphy’ mood, so I go for the black and blue burger. Now, I can guess what you’re thinking – a burger is a burger is a burger, right? Not so. This one features a succulent 200 gram pattie nestled between a light-as-a-feather black sesame seed brioche. The meat is liberally coated with Roquefort cheese and mushroom ketchup and is accompanied by a cone of crispy, salty french fries. Mmm. Best of all, it comes with crunchy dill pickles on the side (and when one of our guests announces he doesn’t like dill pickles, I’m in there like a shot!). Oh yes, there’s also a grilled Cornish mackerel served with trout roe and Waldorf fregola grossa. Everything is cooked to perfection and nicely presented – there’s really nothing here to find fault with, and trust me I look really hard.

Of course, there must be puddings and three of us cannot resist the description of a treacle tart, served with (how good does this sound?) custard ice cream. Yes please! And very nice it proves to be, thick, not too dry (because we all know that can happen, right?) and accompanied by a scoop of something that tastes very like deep-frozen heaven. The fourth member of our party investigates the peach melba – melt-in-the-mouth poached peaches with fresh raspberries, meringue and (nice touch this) jelly and ice cream! It’s a delight, but hey, it’s not treacle tart and custard ice cream, if you catch my drift.

All-in-all, this is splendid grown-up food, perfectly prepared and served in pleasant and convivial surroundings. The white wine offered is a chardonnay and though this would usually invoke a negative mark, it proves to be perfectly drinkable (though a sauvignon blanc would have been more agreeable to us ABCs).

It’s a tiny niggle. We were very happy with our Hotel du Vin experience and I can’t help feeling that, unless you’re extraordinarily fussy, you’ll enjoy it too. Make sure you pop your head into the Burke and Hare room to check out that artwork – unless of course you’ve actually booked the Burke and Hare room, in which case you can sit there and ogle it to your heart’s content.