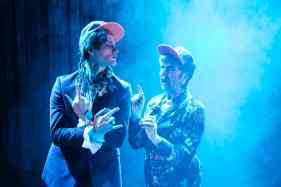 I’ll be honest, I’m not expecting much of The Wedding Singer. Its tagline (“The Hilarious Musical Based on the Hit Film”) seems designed to put me off: I didn’t much care for the film and am suspicious of anything that calls itself funny. Still, if I’ve learned anything over the years, it’s to give stuff a chance; joy is often found in the most unlikely places.

And The Wedding Singer is really very good. It’s an energetic, riotous show, with some great set pieces and strong performances throughout. The tone is set before the lights go down, with a skewed cinema screen projecting trailers from 1980s classics: there’s The Goonies! Oh, and Desperately Seeking Susan! It’s a real nostalgia-fest, and makes one thing absolutely clear: this is a period piece.

And it needs to be, because the unquestioning conformity to gender roles would surely raise an eyebrow nowadays. Girls just want to get married, you see; they like dresses and rings and crockery. As for homosexuality, it’s the punchline to a lot of jokes in this play – and I don’t think that would fly in a contemporary piece, however affectionate the quips. (Maybe it shouldn’t work here either, but the crowd seems to lap it up; surely some of them are feeling as uncomfortable as I am though?)

Despite these issues, this is undoubtedly a feel-good musical with a lot of heart. It’s easy to engage with the two main characters, Robbie and Julia, who are played with warmth and good humour by Jon Robyns and Cassie Compton respectively. Both have lovely voices, ideally suited to the songs they sing. They make a delightful pair.

Ray Quinn, as Julia’s love-rat fiancé, Glen Gulia, is a standout: his dancing in particular is really impressive. And Ruth Madoc’s turn as Robbie’s young-at-heart grandma, Rosie, is the stuff that comic dreams are made of: sure, it’s a pantomime-ish caricature of a role, but her evident enthusiasm for the sheer silliness of it all is absolutely catching.

So yeah, if you’re after something to make you ponder, to broaden your understanding of the world, then this probably isn’t the play for you. But if you’re up for an evening of unabashed fun, then make your way to the King’s Theatre, and prepare to feel the buzz.