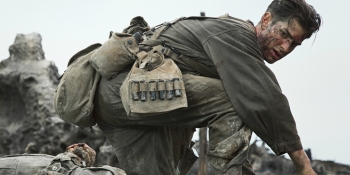 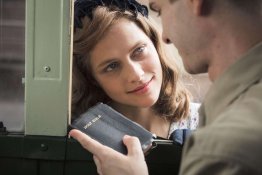 Former megastar Mel Gibson has been persona non grata around Hollywood for quite some time, but Hacksaw Ridge looks like the film that will restore his reputation. Rightfully so, I think, because no matter what he’s done in his private life, he remains a gifted film maker. This assured war movie tells the true story of Private David Doss, a God-fearing young man from the Blue Ridge mountains of Virginia, who after nearly killing his brother in a youthful fight takes an oath never to pick up a weapon ever again. Which is all fine and dandy until the days following Pearl Harbour, when his brother and most of the other young men around the town, join the army, and Doss decides that he really can’t stay at home and let them take all the punishment; so after much consideration, he too enlists – which, as you might imagine causes all manner of problems. His intention to be a medic but of course, things don’t go quite as smoothly as planned…

Having just given us a saintly Jesuit in Martin Scorcese’s Silence, Andrew Garfield offers us another take on the idea, this time as that rarest of creatures, the weaponless war hero. The conflict he is sent to is the American invasion of Okinawa, one of the bloodiest conflicts. We’re often told that war is hell and Gibson’s re-enactment of the events certainly look the part – indeed this must qualify as one of the most visceral movie battles ever. Much of the footage here makes Saving Private Ryan look like a pleasant day at the seaside and those who cannot relish bloodshed would be well advised to give this one a miss. Heads, limbs and brains are propelled around the screen with gusto and, if there’s a criticism of the film, it’s simply that there may be just a little too much of it. I’m not advocating more tasteful bloodshed, you understand, but the sheer volume of the slaughter eventually begins to inure you to the film’s message – that war is a terrible thing and we need to stop sending people off to fight them.

Garfield is terrific though and there’s a pleasing turn from Teresa Palmer as the young nurse he woos in earlier, gentler scenes. Hugo Weaving plays Doss’s alcoholic father, turned bitter by the loss of his best friends in the First World War and watch out for Vince Vaughan, taking a break from his usual slapstick comedy schizzle to give us  a nicely restrained variation on the ‘tough Sergeant with a heart of gold’ – a cinematic line that goes all the way back to John Wayne in The Sands of Iwo Jima and which Gibson himself made a decent fist of in We Were Soldiers.

Towards the end, we start to suspect that Gibson is over-egging Doss’s sanctity a little too much; but a post credits interview with the (late) great man himself seems to confirm that he really was the quiet, unassuming hero that the film makes him out to be.

Harrowing stuff, not for the faint-hearted.