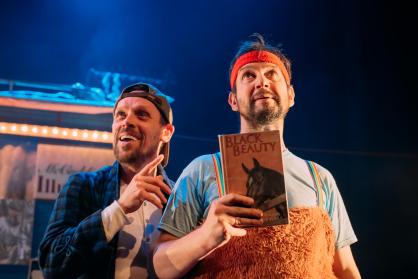 If they gave out awards for Shows That Aren’t What You Expected Them To Be, then the Traverse’s production of Black Beauty must surely be a contender for the top prize. I  genuinely roll up to this expecting a more or less straightforward retelling of Anna Sewell’s classic novel – so I spend the first ten or fifteen minutes in WTF? mode as I am introduced to the McCuddy brothers – Big Andy (Andy Cannon) and Wee Andy (Andy Manley) who make up the front and rear end of a pantomime horse called Hamish. The boys are on their uppers, because sadly nearly all the available roles are going to pantomime cows these days (even the coveted animal role at this year’s Kings Theatre show!).

These opening sections are played for laughs and it quickly becomes apparent that the show is aimed squarely at the younger members of the audience, some of whom are so impressed with what’s going on, they decide to do a running commentary throughout, something that the actors deal with expertly.

Just as I’m beginning to think that this has absolutely nothing to do with that famous novel, the brothers reveal that the book was their late mother’s favourite read and they begin to retell the story in their own quirky style – whereupon the show settles into its stride (or should that be trot?). The staging is simple but ingenious. The horse trailer in which the brothers travel opens up like a box of mysteries to create a host of different locations – and our equine hero is portrayed by all manner of random objects – wellington boots, a handbag and sometimes even by ‘Hamish’ himself. It’s all rather charming and exerts that charm increasingly as the story progresses. There’s a lovely ‘George and Lenny’ interplay between the two brothers – Manley is particularly endearing as the man-child, Wee Andy, always being passed over in favour of his big brother – and the physicality of both performances is precise and wonderfully comedic.

There’s a final, inspired joke at the play’s conclusion, one that really is aimed at the older viewers – indeed, the kids must wonder why their parents are laughing so uproariously – and ultimately this is a lovely family production, suitable for all ages, and – once you get over that initial confusion – really rather fabulous.