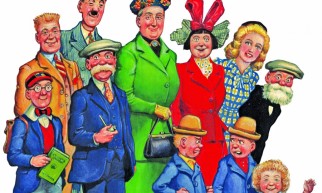 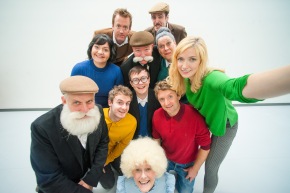 The Broons are a much-loved Scottish institution. It’s hard to believe that, as a popular comic strip,  they have featured in The Sunday Post since 1936 – which makes this theatrical celebration an 80th anniversary event. Written by Rob Drummond and directed by Andrew Panton, it was originally commissioned and developed by Sell A Door Theatre Company and as you might expect, given the subject, there’s a robust cartoonish feel to the show. Maw and Paw Broon (Joyce Falconer and Paul Riley) preside over their working class family in the fictional town of Auchentogle, with real pride and plenty of love. As the title might suggest, the events of the play lead up to the marriage of Maggie (Kim Allan) to the (unseen) Cameron. But Maw doesn’t much like the idea of her little princess leaving the family home – and when she finds out that other members of the family are also planning to move away, she quickly takes steps to ensure that such a thing will never happen…

I’ll be the first to admit that having only recently moved to Scotland, I really don’t have much of a backstory with these characters and consequently, many of the ‘in’ jokes (which elicited roars of appreciative laughter from tonight’s audience) went completely over my head; but there was still much to enjoy here, particularly Laura Szalecki’s portrayal of the man-hungry Daphne and Duncan Brown as the monumentally thick Englishman, Jock Badge, who thinks the term ‘4 to 6 years’ on a jigsaw puzzle is an indication of how long it might take him to put it together.

As events scamper joyfully along,  the actors slip effortlessly from character to character and, since this is a play with music, just about everyone bashes out a tune on some kind of musical instrument at various points in the proceedings. The overall effect is charming and though I don’t really agree with the play’s ultimate message – that it’s better to stay with what you know than to seek out new experiences – it certainly chimes with a story that has remained totally unchanged for so very long. And who could fail to enjoy the rousing singalong at the conclusion that pays tribute to a whole host of Scottish talent from The Waterboys to The Bay City Rollers?

If you’re a fan of these fictional folk, you certainly won’t want to miss this; and, if you’re merely curious as to what the fuss is all about, you’ll still be in for an entertaining night.