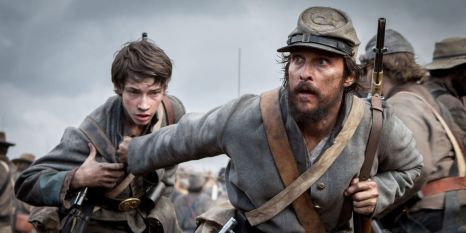 Free State of Jones tells the almost unbelievable true story of the lengths the Confederates went to in order to protect their interest during the American Civil War.

Confederate army nurse Newton Knight (Matthew McConaughey) realises he is a pawn in a rich man’s game and, after his nephew (Jacob Lofland) is killed in battle, he deserts. “It’s not my fight,” he says, noting that he has more in common with the black slaves than he does with the white elite. And so, he bands together a group of runaway slaves, fellow deserters and poor white women and, from their base deep in the swamps, leads a rebellion against the plantation owners, asserting their right to reap the crops they sow and live their lives as free humans, eventually establishing Jones County as a free state and seceding from the Confederacy.

It’s an undeniably important story, highlighting the the vile racism at the heart of American history, and showing how this echoes through the ages with sequences that flash-forward eighty-five years, where Knight’s descendent, Davis (Brian Lee Franklin), is put on trial and eventually jailed for failing to disclose, when marrying, that his great-great-great-grandmother – Newt Knight’s second wife, Rachel (Gugu Mbatha-Raw) – was black.

There’s plenty to admire in this film: it’s a story that needs telling; we need reminding that the Black Lives Matter movement has deep roots, and that racism is firmly embedded in American society. The rich still work hard to protect their own interests, turning the poor against each other to deflect attention from their own excess. And it’s beautifully acted, creating a clear sense of the times; it’s unflinching in its portrayal of the brutality of war and the harsh conditions endured by all.

A shame then that the narrative lacks pace. There’s no clear story arc, no real climactic moment, no drive propelling us to the end. It’s almost dull at times: a series of ponderous moments that don’t quite engage, that keep us at arm’s length. Terrible things happen but I’m never emotionally involved; my reactions are all intellectual.

It’s a good movie and worth seeing, but it’s hard to escape the notion that it could easily have been so much more.