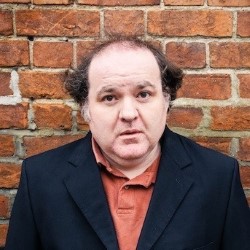 Ed Aczel is a master of anti-comedy, and this hour of apparently shambolic rambling is clearly carefully thought-out. We’re eased in with a music video (Eve of Destruction), where Aczel’s face appears incongruously on the screen, singing along and playing a mouth organ. It’s very silly, and it’s very funny too. It helps to set the tone, and to make us forget the weirdly damp and dingy cave we’re huddled in.

When he appears on stage, Aczel’s clumsy, awkward persona is very well received; we’ve never seen him before, but there are enthusiastic fans in the audience, who start laughing in anticipation before he’s even said a word. His deadpan delivery works well, as does the fact that even the notes he’s reading from are creased and badly stained; this character is fully formed.

I like the first half hour, with its meandering sort-of audience interaction, and the ridiculous deconstruction of the way comedy works. I’m less engaged by the second half, when the foreign policy stuff really kicks in – I suppose I’m hoping there’ll be something more, that all the nothings will, ultimately, amount to something, but I guess the void is the whole point.

Worth seeing, then, and certainly a bit different. If you fancy something other than the mainstream, Ed Aczel just might be the guy.