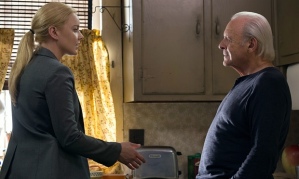 This fast moving pyscho-thriller, directed by Alfonso Poyart and executive-produced by its star, Anthony Hopkins was originally intended as a follow up to Se7en and it certainly treads similar territory, though it has to be said, with rather less spectacular results. A killer is at large in the city of Atlanta, despatching his disparate victims with a single stab wound to the base of the skull and the FBI are frankly, baffled. Agent Joe Merriweather (Jeffrey Dean Morgan) turns to his old colleague, John Clancy, (Hopkins) a psychic who has worked with him on previous cases but who has retired since the death of his young daughter from leukaemia. At first, Clancy is adamant that he doesn’t want to get back in the game but a brief encounter with Joe’s partner, Agent Katherine Cowls (Abbie Cornish) grants him a disturbing vision of her future and persuades him to change his mind. Once on the case, he soon uncovers the fact that all the murder victims are linked by one thing they have in common…

To be fair, the film is slickly directed and well acted by its cast, but it’s fatally skewered by the fact that Clancy’s abilities are so pronounced, he comes across as some kind of psychic superhero, leaving his FBI partners with very little to contribute to the proceedings. One quick touch of the deceased (or one of their possessions … or a flower they recently touched…) unleashes a whole barrage of cinematic images in his head, which act as a kind of conduit for him to anticipate the killer’s every move. Not only does this seem quite ridiculous, it kills any sense of suspense the story might have generated.

In the film’s final third, the killer steps into the spotlight only to reveal that (oh boy) he is psychic too, whereupon all hope of rescuing this movie goes straight out of the nearest window. A shame, because it’s nicely done and entertaining in its own, galumphing way. Those who actually believe in the supernatural may enjoy this more than I did, but honestly, if so-called psychics really were this adept, police forces across the world would have a much easier time of it.