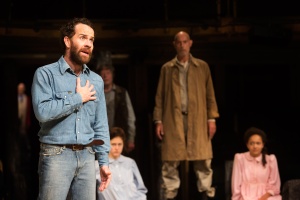 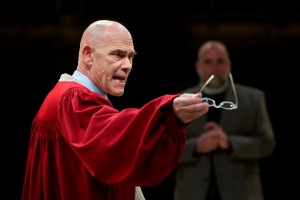 Arthur Miller’s The Crucible is, undoubtedly, one of the great plays of the twentieth century. Written in the early 1950s, it was based around actual events that unfolded in the Puritan community of Salem Massachusetts in 1689; it was also Miller’s opportunity to openly air his feelings about a current event, Senator Joseph McCarthy’s Communist ‘witch’ hunt, without fear of retribution. The similarities were there for all to interpret, but Miller was above reproach, as he could argue that he was simply retelling a slice of history – even though, on closer examination, it appears that he took considerable liberties with the facts. Luckily, nobody bothered to check.

The Royal Exchange’s latest reinterpretation, directed by Caroline Steinbeis, is fascinating. It takes place on a stripped, circular dais across which the sizeable cast act and interact with considerable skill, so much so that when they take their final bow, you’re amazed to realise how many people are actually involved in the proceedings. It’s no longer a period piece – there’s not a stovepipe hat or lace collar in sight. The male actors wear clothing that could easily fit into any rural community of the past thirty years, while the women are dressed in frumpy, near identical dresses, emphasising how much they are made to conform to the expectations of the God-fearing men who surround them.

We’ve seen many versions of The Crucible, but few that delineate the various strands of the tale as clearly and powerfully as this one does, and, in an age where political and sociological witch hunts have become an everyday occurrence, the story seems more prescient than ever. As John Proctor, Jonjo O’ Neill gives a dynamic performance, his strident Northern Irish accent lending his final scenes added power, while Ria Zmitrowicz’s portrayal of the hapless Mary Warren is also a highlight; who knew that there was so much comedy to be mined from her role?

But it’s perhaps unfair to single out individual performances, when this is so undeniably an ensemble piece; there are, frankly, no false notes here.

The Exchange is famed for its ‘wow’ moments and, in the final stretches of the play, that slightly inverted dais is suddenly transformed into a gathering pool of water under a jaw-dropping rainstorm – through which the protagonists are obliged to wade. Coming as it does during Proctor’s final confession, this seems to us to symbolise the way in which a truth can irresistibly spread, to engulf all those who would seek to adapt it to suit their own ends. It is also, perhaps, an allusion to ideas of rebirth and baptism. Others will undoubtedly have their own interpretations; whatever, it will certainly stimulate much after-show conversation as you head for home.

This is a superior production, beautifully staged and expertly acted. Don’t miss it.