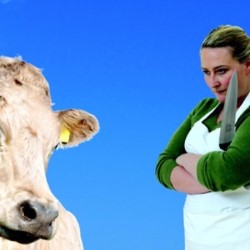 With such a variety of shows on offer at the Fringe, there’s inevitably a range of quality here too. Now and again, though, it’s possible to see something really rather special.

And Charolais is one such thing.

Written and performed by Noni Stapleton, this is an unlikely comedy about a young Irish woman and the jealousy she feels towards a beautiful heifer. The cow, a Charolais belonging to her farmer boyfriend, takes up far too much of his attention, and his mother, Brede, demands what’s left. Siobhan, it seems, must fight to win his love.

As this year’s festival heads towards its end, there are only three more chances left to see this show. Don’t miss out: get a ticket now.