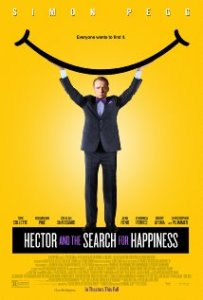 The presence of Simon Pegg in a movie can usually be relied upon as some kind of quality control, but as Hector and the Search For Happiness proves all too readily, this can’t always be relied upon. Based upon the best selling self-help book by Francis LeLord, the film tells the story of Hector (Pegg) a successful psychiatrist, happily living in London with his girlfriend Clara, (Rosamund Pike.) But talking to a succession of depressed people on a daily basis eventually has an inevitable effect on him and he undergoes a bit of a mid life crisis; whereupon he tells Clara that he needs to go off and ‘find himself’ or more accurately, to find the essence of pure happiness.

To this effect, he visits China (for no apparent reason other than Chinese people are considered to be quite happy.) He  goes to work with an old college friend in Africa, and, in the final segment, he visits Los Angeles and his old flame, Agnes (Toni Collette) now a happily married woman with two children and a third on the way. Pegg tries hard to instil the proceedings with some degree of interest but is ill served by a story that despite involving so much travel is clearly going nowhere. It’s all a bit vapid to be honest. There’s some nice scenery to enjoy along the way and several serious actors appear in minor roles – Stellan Skarsgard, Jean Reno and Christopher Plummer to name but three, but apart from a few fridge magnet bon mots, there really isn’t an awful lot to be gleaned from the story, which eventually collapses into a conclusion that is so mind-numbingly predictable, we could have saved Hector the price of all those air fares.