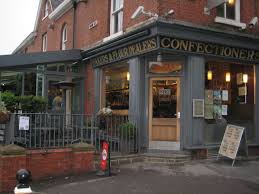 Kro has been in a prime location on the Moor since 2007. Back in the day, it was mostly famous for it’s Danish-inspired specialities, but that aspect has been somewhat reined in and these days it operates as an upmarket pub grub venue. The place has a relaxed atmosphere and the open plan, glass-walled extension makes for pleasant dining, especially in the summer months. On Sunday evenings there’s ‘Song Swap’ where various musicians come together to perform their material. The staff are relaxed and friendly and nothing is too much trouble. Make no mistake, this isn’t a place where you’d come for haute cuisine. If however, you’re in the market for a great value bit of scran and you’re not in the mood to cook something at home, this is hard to beat. There’s a fairly comprehensive a la carte and every evening, you’ll find a selection of specials chalked up on a board, offering two courses for £10 and three for £12.50.

On our latest visit, we decided to stick entirely to the specials board. I began with Lamb Kofta served with tzatziki, rocket salad and pitta bread. The Kofta was spicy and crunchy, though there was only a single skewer. It was accompanied by a generous side bowl of tzatziki and a dry pitta bread. Susan’s choice was Breaded Salmon Bites with sweet chilli sauce. The bites were light and fluffy, delicately flavoured and nicely set off by the sweet sauce. I thought it was the better of the two starters, certainly more generous, though both were perfectly acceptable.

For the main course, I sampled the Crab Cakes, served with wilted spinach, tartare sauce and French Fries. The cakes themselves were a little dry, though flavoursome enough and there was a large bowl of tartare sauce into which to dunk them. The fries were unremarkable and in my estimation, could have done with another minute in the fryer. Once again, Susan fared better with her choice of Slow Roasted Pork Belly, served with crushed new potato cake and a saje (sic) and onion gravy. The pork was melt in the mouth tender with a pleasing crunchy top layer and the rich onion gravy brought everything together nicely.

The portions were generous enough to eschew a sweet, though all three choices sounded appealing. The total bill for the meal, with a round of drinks, came to less than £30, which any way you look at is exceptional value for money.