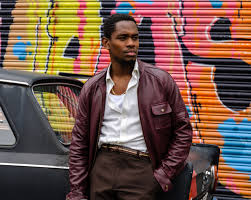 Idris Elba’s debut feature film is an interesting one. Okay, so it’s a little patchy, but there’s real heart here, and energy, and some fabulous performances. Based on the cult novel by Victor Headley, this is as much a character study as anything else, and lead actor Aml Ameen (D), is mesmerising in the central role.

We start off in 70s Jamaica, where young D lives with his brother, Jerry Dread (Everaldo Creary). Jerry is a gentle soul, keen to broker peace between rival gangs, and make Kingston a safer place. But, having secured a truce, the triumphant party he hosts in No-Man’s-Land is abruptly shattered by a teenager wielding a gun. Jerry is killed, and D’s life is changed forever.

We next see him ten years later, and he’s a troubled man, struggling to repress his rage. He’s been taken under the wing of one of the gang leaders, King Fox (Sheldon Shepherd), whose music production company tells only half the story of his wealth. Fox is also a drug dealer, and, when D’s anger at his brother’s murder threatens his business, D is quickly dispatched to London, to sell a large batch of cocaine to Fox’s London connection, Rico (Stephen Graham).

But D’s path does not run smoothly in the UK; he’s too full of fury to seek a quiet life. Haunted by his brother’s memory, D seems determined to self-destruct, jeopardising everything, including his relationship with Yvonne (Shantol Jackson), his childhood sweetheart, and their daughter, Vanessa (Myla-Rae Hutchinson-Dunwell).

Where this film works is in the evocation of the period, the nightlife and the music. It looks fantastic, all vibrancy and colour, and the atmosphere, fuelled by an urgent reggae soundtrack, is electric. But there’s something lacking in the plotting, I think, a strange lack of intensity in D’s quest for revenge that doesn’t quite match the violence he eventually unleashes. Some of the London criminals feel like caricatures, and at times it’s hard to understand what D’s motivation is.

Still, it’s an eminently watchable movie, and the imagery is still imprinted on my mind.