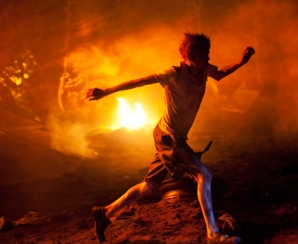 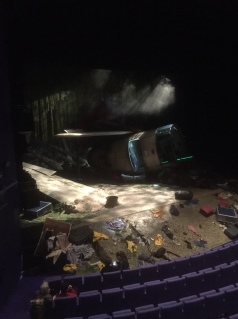 Lord of the Flies is one of my all time favourite novels, so I was excited to see this production, first shown in the open air at London’s Regent’s Park. How, I wondered, would director, Anthony Sheader, stage a story that is set in a variety of locations on a remote jungle-covered island? Well, as it turned out, quite brilliantly.

The set bears some description as it is instrumental to the success of this production. The stage is dominated by the fuselage of a crashed plane. One of its wings forms a ramp along which characters can enter and exit. The tailplane provides an upper level from which characters can stand to survey ‘the island.’ In the foreground, the detritus of the crash extends right to the feet of the audience in the front row of the stalls, almost including them in the scene. As the story unfolds, trapdoors are opened and closed to provide yet more levels in Souvenir Scenic’s ingenious set.

The script has cleverly updated the story to contemporary times – there are aborted selfie-stick moments, and even an allusion to a ‘new war’ from which the children were fleeing. Unlike the source novel, the pupils come from a variety of backgrounds – Jack and his choristers clearly hail from a top flight public school, Ralph from a mid range one and Piggy, a bluff Northerner, from a comprehensive. This all helps to emphasise the cruelty of the bullying suffered by Piggy and the other, weaker boys and makes their ultimate fate all the more compelling.

It’s pointless to single out individual actors for praise as this is a true ensemble piece, but plaudits must go to choreographer, Jonathan Holby, who manages to co-ordinate the movements of his large cast flawlessly, regularly cutting between normal speed and slo-motion to display simultaneous events. The final ‘hunting’ of Ralph, builds steadily to a thrilling climax and the sense of shame at the play’s conclusion is utterly heartbreaking.

This is a superb adaptation of a literary masterpiece. We saw it on it’s final date at the Lowry, but the show will be touring the country in 2016. If it lands anywhere near you, please ensure you grab the opportunity to see it. It’s too good to miss.