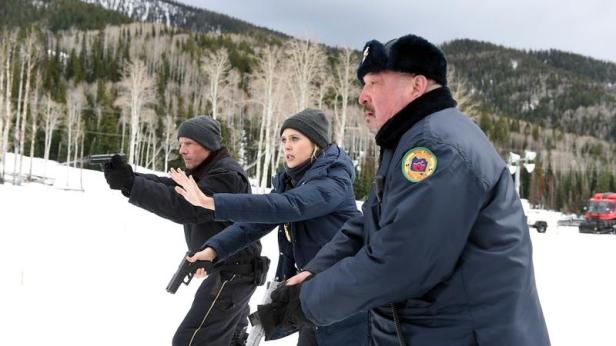 In a moonlit pre-credit sequence, a young native American woman flees across a snowbound landscape, barefoot and gasping for breath. It’s an arresting introduction, one which certainly grabs the viewer’s attention. This bleak and rather melancholic slowburner is based around the resulting investigation into the woman’s death, carried out on the remote Wind River reservation in Wyoming. Inspired by true events, it’s written and directed by Taylor Sheridan (author of Sicario and Hell and High Water). The events unfold in inhospitable mountainous landscapes, which are beautifully captured by Ben Richardson’s sweeping cinematography.

The woman’s body is found by veteran tracker, Cory Lambert (Jeremy Renner), out hunting wolves. He instantly recognises the dead woman as Natalie, the former best friend of his late daughter who herself died in suspicious circumstances, something that Lambert has never fully come to terms with. FBI agent Jane Banner (Elizabeth Olsen) is assigned to handle the investigation, arriving at the location dressed in high heels and severely ill-equipped to deal with the hostile weather conditions. She wisely enlists Lambert (and his snowmobile) to get her from place to place in order to talk to Natalie’s family and to help her interview the list of potential suspects.

Renner and Olsen submit moving performances and manage to generate some real chemistry between them, and there’s a heartfelt (and never patronising) view of the local Native American’s plight as they struggle to survive in a world that has robbed them of everything they ever valued. There are nice turns from Apesanahkwat as world-weary tribal police chief, Dan Crowheart, and from Graham Greene as the dead girl’s father, Ben, struggling to understand the iniquities of life on a reservation.

A pity, then, that the final third of the movie squanders all these good intentions by making an abrupt detour into much more cliched territory – there’s an extended gunfight, some harsh ‘eye-for-an-eye’ vengeance, a horribly graphic rape scene and men generally a-doin’ what men gotta do – at least in Sheridan’s macho world view. It’s almost as though two quite different movies have been clumsily stitched together.

Wind River is worth seeing for that ravishing location photography and those appealing performances, but there’s the distinct conviction that it would have been a better film if it had stuck to its guns, rather than firing them off in all directions. 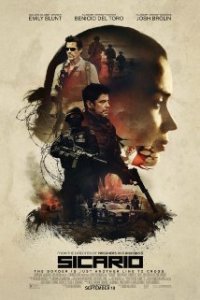 ‘Cancel that holiday in Mexico!’

That would seem to be the overriding message of Denis Villeneauve’s white-knuckle ride of a thriller in which FBI operative, Kate Macer (Emily Blunt) finds herself mixed up in the violent world of the Mexican drug cartels. Assigned to work alongside Matt Graver (Josh Brolin) and the mysterious Alejandro (Benicio Del Toro, looking increasingly like Brad Pitt’s Puerto Rican twin) she starts off with high hopes and good intentions, as the team work their way towards the Mister Big who is responsible for the murder of hundreds of innocent people; but she soon discovers that, in this shady operation, the good guys are pretty much indistinguishable from the bad ones.

Blunt, of course, cut her action chops on the seriously underrated Edge of Tomorrow and she’s on excellent form here – but it must be said, that Taylor Sheridan’s script is incredibly misogynistic. Poor Kate is beaten, throttled and crushed at every opportunity and as the one character in the film with any apparent sense of decency, the film’s bleak conclusion seems to bray the fact that women should keep their nibs out and leave the rough stuff to the big boys. And wouldn’t it be nice if, just for once, a character’s motivations weren’t based around his desire to revenge himself on the man who killed his wife and daughter?

This is a shame, because in most other respects the film works brilliantly – there are tense shootouts aplenty, gripping covert operations and a nightmarish vision of Juarez that certainly won’t make it into the holiday brochures. But when the film’s central character is a strong woman, trying to stand tall in a male-dominated environment, her eventual failure to do so  does seem suspiciously like a missed opportunity.