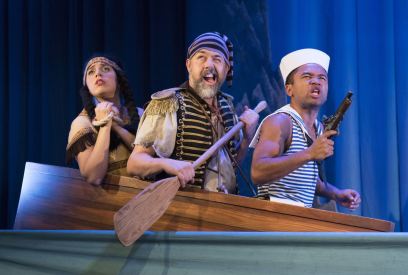 We’ve all been there, haven’t we? That excruciatingly bad theatre performance in the local village hall where everything goes wrong – the actors can’t act, the singers can’t sing and the dancers can’t dance. The makeshift props have a habit of collapsing at key moments and the lighting and sound cues are completely out of control. This, of course, is the kind of stuff that fuels Mischief Theatre’s productions, and is at the heart of their meteoric success since 2013’s The Play That Goes Wrong.

With Peter Pan Goes Wrong, things have taken a palpable step up. Perhaps it’s simply because it’s based on an established classic, or maybe they are learning to push the boundaries of what they do, but – whatever the reason – the gags are more confidently staged, while some of the ‘accidents’ look convincing enough to make me wince. It’s an ensemble piece so it’s hard to pick out individual performances, but I do laugh muchly at Katy Daghorn’s exaggerated physicality in the role of Wendy and I love the way that both Max “Only There Because His Dad Is An Investor In The Show” Bennett (Tom Babbage), and Lucy “The Co-director’s Daughter Who Suffers From Stage Fright” Grove (Georgia Bradly) are given the opportunity to milk the audience’s sympathy.

Of course, since Peter Pan productions famously involve wire work, there’s plenty of scope for the titular hero to flail helplessly around above his co-stars heads, and the idea is exploited to the full. Also, a pirate ship number – which brilliantly utilises an out-of-control revolving stage – builds to a frenetic and highly inventive climax that has me laughing so hard I nearly fall off my seat.

Here’s the proof that getting things wrong in the theatre can sometimes pay off handsomely.