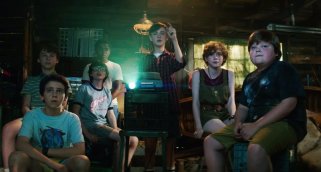 Like many readers, I came to Stephen King’s writing in the early seventies, when his debut novel,  Carrie had just been released. I read a lot of his books and I thought that It was one of his best later efforts, despite the inclusion of a lamentable (what-was-he-thinking?) scene towards the end of the story that seemed to have strayed in from an entirely different genre. And of course I saw the 1990 TV adaptation, memorable for Tim Curry’s spirited performance as Pennywise but not much else. This new release, however, has certainly caught the public imagination. In a year where overall box office takings are dramatically down, the film is already proving to be a major hit with the public.

The town of Derry is plagued by a string of mysterious disappearances – most recently, young Georgie Denborough (Jackson Robert Scott) has chased a paper boat along a rainy gutter and into the clutches of a homicidal clown. The event leaves Georgie’s older brother, Bill (Jaeden Lieberher), riddled with guilt and obsessed with finding his lost sibling. Bill teams up with a bunch of fellow outsiders from his school and together they start to uncover Derry’s infamous history – one that appears to feature a list of similar disappearances going back for centuries…

What made the source novel so good was that King really knew how to write about teenagers – and that’s certainly the element that new director, Andy Muschietti, gets right. There are appealing performances from all of the young actors in this version, especially from Sophia Lillis as Beverly and from Finn Wolfhard, channeling his inner Corey Feldman as motormouthed geek Richie Tozier. Bill Skarsgard’s Pennywise is also fabulously creepy in the early scenes, but inevitably, the more we see of him, the less scary he becomes. This means that I really enjoy the first hour or so, but by the time the young protagonists had pursued their supernatural quarry down into the sewers, I am enjoying proceedings a whole lot less. Somebody should have whispered in Muschietti’s ear the old maxim that less is more. But no, he keeps piling it on, and all the menace he’s worked so hard to create runs straight down the drain. Interestingly, it’s the same problem that plagued his earlier film, Mama.

And it’s not just the over-reliance on effects that niggles here. What passed for plotting back in the eighties is starting to feel decidedly heavy-handed in this day and age. I could have done without the cartoonish gang of bullies terrorising the weaker kids in town (or at least had their over-the-top antics dialled down a couple of notches) and, while I appreciate the whole thing is a metaphor for kid’s coming to terms with their true identities, the points don’t need driving home with an economy-sized sledgehammer. As for the decision to turn the book into two different films, one dealing with the nineteen eighties and another featuring the kids all grown up and returning to Derry to confront their old nemesis? Well, given the success of part one, the creators are doubtless rubbing their hands at the prospect of pulling it off a second time.

Whatever I think about It hardly matters. It’s already a massive success and one that clearly chimes with a wide audience. King will, I’m sure, be pleased at what’s finally been done with his book. After so many cack-handed adaptations of his work (including The Lawnmower Man, from which he made a point of having his name removed) this at least is recognisably his brain child. It’s frankly not the spine chilling masterpiece that many have labeled it as, but maybe you can’t argue with bums on seats. 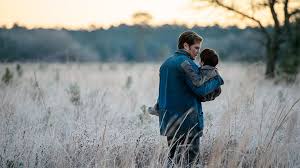 Writer/director Jeff Nichols has given us some fine movies over the last few years but one thing he’s not so good at is coming up with a decent title. Take Shelter? Not one of the best. Mud? A terrible title for an excellent film. And now, here’s Midnight Special, a title that for the life of me I can’t see the relevance of when applied to this absorbing story – but I suppose this is a minor niggle. The film this most reminds me of is ET… though I hasten to add, a much more sophisticated, grown up and gritty version of Speilberg’s sci fi tale.

Alton Meyer (Jaeden Lieberher) is a very special boy. It has something to do with his eyes. He must be kept in darkness as much as possible and has to wear special goggles whenever he steps into the sunlight. When we first meet him, he’s been abducted by his biological father, Roy (Michael Shannon) and his friend,  cop Lucas (Joel Egerton) from the religious community that has looked after him for the past two years. Because of the boy’s habit of ‘speaking in tongues,’ the cult’s leader,  Calvin (Sam Shepard) believes that Alton may be some kind of messiah and he and his followers will do just about anything to get him back, even if it means picking up weapons to enforce their will.

Sam and Lucas hook up with Alton’s birth mother, Sarah (Kirsten Dunst) and the four of them set off on a perilous journey to bring Alton to the special destination where he repeatedly tells them he needs to be – but how can they get there when the combined forces of the FBI, the US military and a bunch of religious fruitcakes are intent on intercepting them?

Midnight Special is expertly told, releasing nuggets of information bit-by-bit, just enough to keep you hooked and to make you want to know more. When the solution is finally revealed it is, quite frankly mind-blowing and at this point, will divide audiences into ‘hell yes!’ or ‘no way!’ categories. I, happily, belong to the former. There are compelling performances from all concerned (Adam Driver is particularly good as a baffled boffin trying to work out what’s happening) and the pace never flags.

This is a riveting story about the power of belief and the lengths to which people will go to honour it. It also confirms Nichols as a film maker at the height of his powers.

It will be interesting to see what he does next.