Trial by Fire belongs in what’s fast becoming a familiar category in cinema – a based-on-a-true-story account of a person’s lamentable dealings with the American judicial system. Inspired by David Grann’s article in the New Yorker in 2009, Edward Zwick’s movie adaptation had its premiere in May 2018 and thereafter got somewhat lost in the shuffle. Now it’s getting a second chance on Netflix, and it’ thoroughly deserves to be seen, even if the story is unremittingly bleak and feels uncomfortably similar to recent releases like Just Mercy and Clemency. The overriding message, however, is crystal clear: capital punishment is a bad idea, especially in a system where the poor and under-privileged have the odds so heavily stacked against them.

Cameron Todd Willingham (Jack O’ Connell) is a mouthy young man with a predilection for heavy metal and infidelity. He’s maintaining a stormy relationship with his wife, Stacy (Emily Meade), and struggling to care for his three young kids. He’s not particularly likeable, is constantly quarrelling with Stacy (generally over his affairs with other women), and has a history of violence. But everyone who knows him agrees on one thing: he loves his kids. When a devastating house fire takes their lives and he manages to survive the conflagration, the investigating officers have no doubt in their minds that he set the fire deliberately – and, in the absence of any proof, they’re perfectly happy to fabricate some.

So Cameron winds up on Death Row, sitting in a cell and waiting for his turn for the lethal injection…

Years drift by. Cameron mellows a little, he learns how to maintain friendships with fellow prisoners and acquires an education. A chance meeting between playwright Elizabeth Gilbert (Laura Dern) and a prison reformer affords him the first real visitor he’s had in years. Elizabeth is surprised to find him a compelling and likeable character, so she decides to visit him on a regular basis. As the two of them grow closer, she is encouraged to start looking into the flimsy case that sent him to prison in the first place. It doesn’t take her long to discover some shocking irregularities in the prosecution’s account of what went on.

But she is to discover that finding proof of a man’s innocence – and getting the powers-that-be to reopen his case – are two very different things.

In fiction, of course, this story would be depicted as a desperate race against time, with a phone call offering a pardon coming through at the last possible moment, but Geoffrey S. Fletcher’s screenplay sticks doggedly to the facts of the case. Consequently, the final stretches of this film are an angry howl of protest, a cogent plea for sanity to prevail. Sadly, it’s unlikely to change anything, but you’ll be hard-put to sit through this without feeling a mounting sense of resentment simmering within you. Both O’ Connell and Dern offer compelling performances, and Chris Coy does excellent work in the role of a prison guard, who starts off as an arrogant bully but is gradually redeemed.

But, like I said – this is grim stuff, not for the faint-hearted. On this evidence, can the USA really continue to claim that it has anything resembling a functioning system of justice? 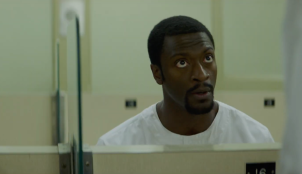 Anybody who still believes that the death penalty is a defensible punishment should sit down and take a long, hard look at this film. Chinonye Chukwu’s bleak, slow burn of a movie ably demonstrates the ways in which capital punishment brutalises and destroys all who come into contact with it – including those who have to implement its chilling procedures.

Bernadine Williams (Alfre Woodward) is the warden of an American prison, a place mostly populated by inmates awaiting death by lethal injection. In a blistering opening sequence, we see one such execution being carried out in unflinching detail. It’s horribly botched, which makes it all the more affecting.

Also waiting on death row is Anthony Woods (Aldis Hodge), a taciturn young man accused of murdering a police officer. He’s been imprisoned for seven years and  insists that he’s innocent, but what makes Clemency different from Just Mercy – a film with which it will inevitably be compared  – is that we’re really never sure whether he has committed the crime or not. In a way, it’s irrelevant, because it’s the very system of capital punishment that’s on trial here and not its victims.

Bernadine is struggling with her duties as warden – the daily grind of dealing with the fear, the hope, the demonstrators, the relatives of those imprisoned and, of course, the inmates themselves. She takes solace in drink and realises that a wedge is developing between her and her husband, Jonathan (Wendell Pierce), but feels unable to do anything about it. Around her, other people are quitting. Defence attorney Marty Lumetta (Richard Schiff), who has spent his life fighting for death row prisoners, tells Bernardine that Woods’ case will be his last – he just can’t take any more campaigns for clemency that never yield results. Even the dead policeman’s parents feel that justice has already been served and want Woods to be pardoned. And he, meanwhile, has pinned all his his hopes on meeting his young son for the first time.

Both Woodward and Hedges submit powerhouse performances here; neither of them isafforded much opportunity to talk, but their fears and hopes are writ large in every move, in every despairing look they direct towards the camera. This will not be the happiest screen experience you’ve ever had, but it’s nonetheless a stirring and emotional story, and a passionate plea for change.