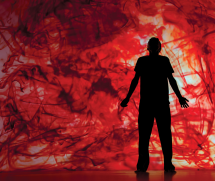 Looking back through my diary of another life, in another time, I note that I was due to see the touring production of this play at the King’s Theatre, Edinburgh, in early April 2020. It now seems unlikely that this was ever a possibility. Sitting in a crowded auditorium, enjoying a live performance? Is that really how we used to carry on?

Some productions have added resonance because of personal experience. Back in 2006 when I’d just embarked on my career as a children’s author, I was fortunate enough to meet Siobhan Dowd, when our respective debut novels were nominated for the same award. She was utterly charming and I had no inkling then that she was only a year away from her untimely death from breast cancer. A Monster Calls was an outline for a future novel that she didn’t live long enough to deliver to her publishers. It was subsequently completed by Patrick Ness and became a huge success in 2012.

I also loved the film version, directed by J A Bayona in 2017, which (another coincidence) featured one of Susan’s drama school pupils in the lead role (although she didn’t actually teach him). Even without these connections, this would still be a powerful and affecting story. I remember leaving the cinema, red-eyed from weeping.

This production, filmed onstage at the Old Vic in 2018, is now available for a limited run on YouTube. Though perhaps not as slickly filmed as many of the recent  ‘live’ theatre performances, there’s no doubting the emotional heft of the story. The central premise, clearly inspired by Siobhan’s own circumstances, is utterly heartbreaking.

Thirteen-year-old Conor McGregor (Matthew Tennyson) is in meltdown. His beloved Mother (Marianne Oldham) is gradually succumbing to cancer and he doesn’t know how to handle it. Estranged from his father (Felix Hayes), who now lives in America with his new family, Conor has nobody to confide in. He is being perpetually bullied at school and is resisting all attempts by his well-meaning grandmother (Selina Cadell) to make him accept that his life is about to undergo a massive change.

When his mother points out an ancient yew tree near to the family home, Conor begins to experience a series of bizarre visitations from The Monster (Stuart Goodwin) who lives within the tree. He relates a series of bizarre fairy stories and encourages Conor to face up to an awful truth…

There’s so much to relish here: the exquisite staging which ranges from stripped-back simplicity to explosions of almost pyschedellic colour; the ingenious use of ropes to evoke a whole series of images and settings; and there’s a sumptuous electronic soundtrack played live by Will and Benji Bower that adds a lush, dreamlike quality to the proceedings. The thirteen-strong cast all offer exemplary performances, though of course it’s Tennyson, in the lead role, who carries the heaviest load.

Is it as good as witnessing the play live? No. Am I glad it exists? Damn right!

Those who haven’t experienced A Monster Calls should catch this while it’s still available (you have until 12th June). And those who already love it could do a lot worse than indulging in another helping, just to relish those bitter-sweet flavours.