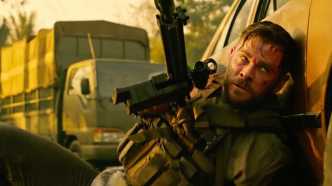 Written by Joe Russo (one half of the world’s most successful filmmaking duo) and directed by former Avengers stunt coordinator, Sam Hargrave, Extraction is a brutal action flick that once might have found an audience amongst undemanding cinema-goers, but is now plying its muscular swagger on Netflix. Chris Hemsworth stars as hard-bitten mercenary, Tyler Rake – a name that sounds more like a useful instruction for a gardener than an actual person – and, when we first meet him, he’s already taking bullets on a bridge in Dhaka, whilst being haunted by blurred memories of a happier, earlier lifestyle.

When Ovi Maharjan (Rudhraksh Jaiswal), the teenage son of a powerful Indian drug lord, is kidnapped by a rival gangster, Rake is handed the unenviable task of rescuing him and bringing him back alive. At first the mission goes surprisingly smoothly but, of course, things quickly go awry when Rake finds himself double-crossed  by Ovi’s father. What first seems like a straightforward extraction becomes ever more complicated, as armed drug dealers and a corrupt police force team up to recapture Ovi.

This is based on a graphic novel, but for much of the time feels more like it’s trying to emulate a video game, as Rake guns down, stabs, and punches what appears to be an interminable number of adversaries. At one point, he even takes out a troublesome opponent with the very gardening implement from which his name derives. For the first ten minutes or so, the action set pieces are suitably thrilling, but since all the fight scenes seem to go on forever, they soon start to become tedious.

Ironically, the film works best during its (admittedly brief) quieter stretches, though Rake is such a monosyllabic character, I find myself longing for him to utter more than the occasional grunts he emits whenever his teenage ward asks him pertinent questions. On the plus side, it’s great to see a mainstream film that employs so many subtitles, and the settings are beautifully presented, even if Rake appears to be doing his level best to eradicate most of the local population.

This is an unabashedly amoral tale. Our ‘hero’ is a man who will do pretty much anything for the right amount of money, the other major players all equally repugnant. There’s also a cameo by David Harbour as Rake’s ‘oldest friend,’ another mercenary, ready to sell poor Ovi to the highest bidder. Of course, Ovi is the only character here we can really root for, but, since he spends the entire film running frantically for safety, he never gets the opportunity to connect as he might do – and it’s hard to understand exactly why a deep bond seems to flourish between him and Rake, when they’ve barely exchanged a dozen words.

This isn’t awful, but somebody should have told the writers that less is more, and that a couple of beautifully executed, brief action sequences would have connected a lot more effectively than the endlessly protracted mayhem that’s on offer here.