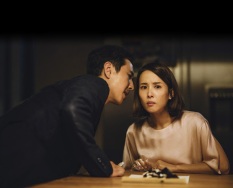 I’ve long been a fan of South Korean director Bong Joon-ho. His 2006 film, The Host remains one of my all-time favourite creature features, while both Okja and Snowpiercer, though not perfect, are the work of a director who’s always ready to break new ground and look for the unexpected in every situation. With Parasite, however, he takes a giant step into the stratosphere. This is filmmaking at its most inventive. Little wonder it’s hotly tipped to lift the Oscar for best international film and, possibly,  the biggest prize of them all.

It’s the story of two families – one poor, one rich – and their interactions with each other. The Ki family are down-on-their luck, all four of them unemployed, living a squalid existence in a stinkbug-infested basement and reduced to hacking the wifi signals of their neighbours in order to find out what’s happening in the world.

Then young Ki-woo (Choi Woo-sik) is unexpectedly handed a lifeline by his student friend, who asks him to take over as English tutor to the daughter of a wealthy family, the Parks, who live in a super-swish uptown house. Ki-woo is not qualified to do the work, but his sister, Ki-jung (Park So-dam), is a dab hand on the computer and easily runs him up some fake documentation. He charms the gullible Yeon-kyo (Cho Yeo-jeong) into employing him and, when he finds out that her troubled young son has artistic aspirations, Ki-woo seizes the opportunity to bring in his sister as an ‘art tutor’ called Jessica.

From there, it isn’t long before the conniving kids have managed to instal their father as the family’s chauffeur and their mother as a replacement for the Park’s long-term housekeeper. So far, what we have is a very enjoyable story about a cunning deception, played for laughs and endlessly inventive as the home invaders, driven by the desperation of their own poverty, use ever more complicated ruses to assert their dominance over their rich employers.

But it’s at this point that the story takes a much darker turn, stepping in out of left field and slapping the viewer hard. It would be a crime to reveal anything more of the plot; suffice to say that what emerges is a brilliant study of class and privilege – an examination of the harsh, uncrossable wastelands that lie between the haves and the have-nots. The brilliance of the script is that you still feel sympathy for the confidence tricksters, no matter what depths they sink to in order to maintain their deception. Neither are the Parks depicted as monsters; they are just over-privileged, and oblivious to the fact that they’re treating their employees as disposable commodities.

As the story gallops towards its shocking climax, there’s barely time to catch your breath – and there’s a wistful, aching coda that has me leaving the cinema with a tear in my eye. Parasite is not only a landmark event for Asian cinema, it’s the work of a brilliant director at the height of his game. Those who are put off by subtitles should note that it really doesn’t matter here. See this version, before the inevitable American remake appears.