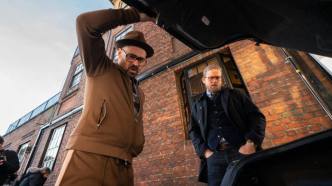 When Guy Ritchie first burst onto cinema screens in 1998 with Lock, Stock and Two Smoking Barrels, his felt like a genuinely fresh voice and, two years later, Snatch served to consolidate his reputation. But his output over the intervening years has not been as assured. (Anybody who had the misfortune to witness his attempt to reinvent King Arthur as a diamond geezer will know where I’m coming from here.) While his recent box office crowd pleaser Aladdin doubtlessly put him back into the black, it could have been directed by just about anybody. So, perhaps it’s no surprise that The Gentlemen is an all too-obvious attempt by Ritchie to return to his glory days. It’s all here, complete with an 18 certificate and enough C bombs for ten films. Take that, Walt Disney!

The lead ‘gentleman’ of the story is Rhodes scholar turned pot dealer, Mickey Pearson (Matthew McConaughey), who is the top drug baron of the realm. He mingles with the aristocracy, who cheerfully help him to grow his crop, and is rich beyond the dreams of Croesus. But he’s looking to get out and spend quality time with his wife, Roz (Michelle Dockery), so he offers to sell his business to Mathew (Jeremy Strong) for a cool 200 million dollars. As you do. But of course, other ‘gentlemen’ are sniffing around, including Dry Eye (Henry Golding) and, naturally, there are various attempts by various others to muscle in on the deal. On reflection, maybe the film should have been entitled The Scumbags, because there’s nobody here to root for, each successive character as nasty and depraved as the previous one. McConaughey, by the way,  has very little to do here except wander listlessly around in a tuxedo.

The story is related by seedy private eye, Fletcher (Hugh Grant, entertainingly playing against type) to Raymond (Charlie Hunnam), Mickey’s right hand man. Fletcher, it seems, has blackmail on his mind, and has written a ‘screenplay’ about the whole thing. He pitches it to Raymond (and the audience) as if trying to get us on side. A convoluted shaggy dog story ensues…

Sadly, Ritchie’s attempt to get back to his former strengths misfires horribly. Despite a pleasing turn from Grant and another from Colin Farrell as ‘Coach,’ this comes across as one of the most unpleasant and racist films of recent years. ‘I’m an equal opportunities offender,’ boasts one character and sure enough, all the non-caucasian characters in the film – black, Jewish, Asian – are treated with the same insulting, tone-deaf approach. Furthermore, poor Michelle Dockery, who has pretty much the only speaking role for a woman in the entire film, is horribly served, her one scene of any consequence marred by a spurious and gratuitous sexual assault. The main problem, of course, is that Ritchie is doubtless blissfully unaware of these shortcomings, a privileged white man still trying to prove his ‘street’ credentials.

Society has moved on considerably since the 1990s, but Ritchie, it seems, has not. He’s still stuck in that decade. And this is not a promising start to 2020.