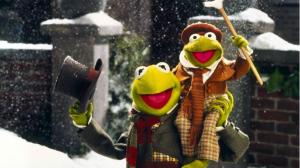 Most film fans have those puzzling gaps in their backlists – movies they’ve always meant to watch but, somehow, have never gotten around to. Over the years, I’ve gone to considerable lengths in my attempts to rectify such situations. (I’m the guy who sat doggedly through the six hour silent version of Abel Gance’s Napolean, just so I could say I’d seen it.) But, until yesterday, I had never seen The Muppet Christmas Carol. And neither had Susan. Admitting to it on social media unleashed a stream of comments from people who have long cherished it as a yearly festive treat. What were we thinking of? Were we crazy?

It’s not that I have an aversion to the Muppets. Far from it. I loved their TV series back in the day, I’ve seen most of Jim Henson’s cinematic offerings (including The Dark Crystal) and, as a former drummer, whenever I see Animal’s leering countenance, I find myself smiling in something like recognition. But, nevertheless, I missed the film on its initial release in 1992 and, after that, never cared to watch it on the small screen. So, when I see it listed as one of the Cameo’s Christmas offerings, I resolve to finally put the matter to rest.

And of course, my friends are right. It’s an absolute charmer, a retelling of Dickens’ classic tale that sticks very closely to the original, even incorporating many of the great writer’s own words. It simply swaps some of the key characters for cuddly puppets and throws in several jaunty songs by Paul Williams. What’s not to like?

There’s something so right about Kermit playing Bob Cratchit that it’s hard not to cheer – while turning Fezziwig into Fozziewig and having him played by Fozzie Bear is little short of genius. Dickens himself makes an appearance, played by The Great Gonzo and aided by his friend, Rizzo the Rat. It’s always been a wonder to me how Henson’s simple creations seem to come alive in front of the cameras, but they absolutely do. I even shed genuine tears over the scene where Bob and his wife, Emily (Miss Piggy), mourn the passing of their son, Tiny Tim. And yes, I realise I’m crying over a few scraps of green felt, but I can’t help myself.

It’s more than just the puppetry, of course. The delightful production design by Val Strazovec gives the film an enchanting visual flair, and I love the supernatural elements, particularly the Ghost of Christmas Yet To Come, who looks like he’s crept out of a movie by Guillermo del Toro.

Best of all is Michael Caine’s accomplished performance as Scrooge, resolutely refusing to tip a wink or give a nudge to the audience, playing the role with absolute gravitas. It’s this serious element at the heart of the story which makes all the buffoonery around him resonate. Caine has made many movies over the years, but this surely ranks as one his finest achievements.

So yes, I’m glad I finally ticked that box. The Muppet Christmas Carol is a heartwarming delight. And it’s only taken me twenty-seven years to come to that opinion.