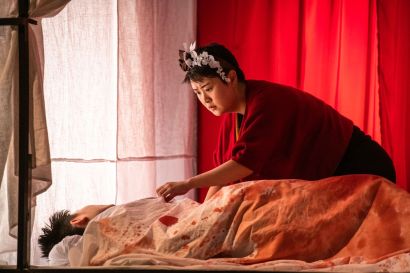 Strange Tales is clearly a passion project. Pauline Lockhart – who co-directs, co-wrote and co-stars in the production – was looking for a venture that could combine three perennial bedfellows (folk tales, the supernatural and, naturally, martial arts), when she came across Pu Songling’s Strange Tales from a Chinese Studio. In collaboration with Ben Harrison, and supported by a whole raft of partners, including the Confucius Institute for Scotland and the RSC, she has created a quirky, dreamlike piece of theatre that lingers in the mind long after the applause.

Lockhart resolves any notion of cultural appropriation, both by being upfront in asking, “Is it okay for me to tell these tales?” and – more importantly – by casting Chinese and Malaysian Chinese actors Luna Dai and Robin Khor Yong Kuan to work alongside her. This three-hander, set on a stage that breaches the first few rows, breaks the fourth wall in a casual, almost familial way, as the performers tell us what the tales mean to them. For Lockhart, they are a recent discovery, but Dai remembers her grandmother telling them to her, while Kuan not only read the book, but watched a TV adaptation too. ‘Everyone knows Pu Songling, right?’ he asks us, the tumbleweed response making us confront a simple truth – that borders limit our knowledge.

There’s a delightful playfulness to this production, with humour taking precedence over terror. The tales are, indeed, quite strange, with ghosts and demons and fox-spirits moving between the living and the dead with apparent ease. The three actors perform a whole host of roles with consummate skill, and the action is cleverly enhanced by puppetry, video and choreographed movement. The sound effects are spectacular, and there’s a little bit of magic or illusion too, with a couple of vanishing acts that genuinely bewilder me. How did they…? Huh?

These are morality tales without obvious morals, highly entertaining and most unusual (to me, and this Scottish audience, at least). I’ve never seen anything quite like them.