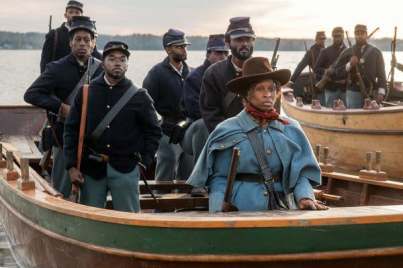 Anyone who has witnessed the superb double-punch that was Bad Times at the El Royale and Widows will surely have the same conviction as me: that Cynthia Erivo is destined to be a major player in the cinema. So her presence in the lead role of Harriet feels suspiciously like an affirmation. This is a part she was born to play and it’s hard to imagine anyone better suited to depict this spirited, fearless woman. Filmmakers have been playing with the idea of a Tubman biopic for something like twenty-five years now, back when producers actually considered offering the role to Julia Roberts! Wow. But here, finally, is the film we’ve been waiting for and, in terms of a performance, Erivo knocks it right out of the park.

We first encounter Harriet Tubman in 1846, when she’s Araminta Ross, a slave ‘belonging’ to the Brodess family in Maryland, and dreading the prospect of being sold further south, as her two sisters were when she was a child. She’s also prone to having religious visions, a legacy of a fractured skull delivered by her ruthless owner, Edward. Harriet is married to John Tubman (Zackery Momoh), a so-called free man, and has acquired legal papers to prove she too should be free. But Edward is adamant that he will never give up such a valuable piece of property. When he dies, his equally odious son, Gideon (Joe Alwyn), needs to pay off his father’s gambling debts and decides that he will sell Harriet. She takes the only option she feels is left to her and runs away, leaving John behind for fear of getting him involved in her illegal act.

Through sheer grit and determination, she makes the one-hundred-mile trip to Philadelphia unharmed, and is introduced to William Still (Leslie Odom Jnr), a major player in the Underground Railroad, a secret organisation dedicated to bringing slaves from the Southern states to freedom in the North. Harriet takes her new ‘free’ name and tells William she wants to go back to Maryland to rescue her husband and the other members of her family, but he doubts that a lone woman could ever achieve such a task. Undaunted, she heads back anyway, risking her own capture to bring her loved ones to freedom. Once there, she finds that John, believing her dead, has married and is due to be a father. But the rest of her family still need guiding to safety. This achieved, Harriet extends her help to strangers. And when changing laws mean that she has to take her ‘passengers’ as far north as Canada, she doesn’t hesitate to do so…

Harriet is a film that eloquently communicates the true horrors of slavery. Whip marks on people’s bodies bear silent testimony to the horrors of the antebellum South, and the story doesn’t hold back on shaming the people who perpetuated slavery and who were even willing to go to war in order to preserve it. Gideon Brodress is depicted as a truly loathesome example of humanity and, sadly, the corridors of power are populated by others just like him.

Tubman, by the way, is one of the few women who served as a soldier during the American Civil War, leading a black regiment to rescue 750 captive slaves at Combahee River. It would be hard to imagine a more worthy recipient of our respect and yet, when it was recently suggested that her image should replace that of Andrew Jackson on the $20 bill, a certain Donald Trump had the change ‘postponed’ until 2026. Which demonstrates that we may not have come as far as we might like to think.

Till then, Kasi Lemon’s moving and important film must suffice as Harriet Tubman’s memorial. Unsurprisingly, it isn’t getting the kind of massive rollout that more commercial movies are receiving, but I urge you to see it, if only for Erivo’s dazzling performance in the title role.