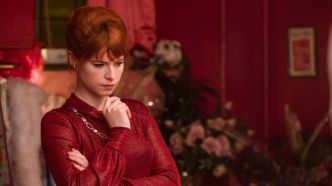 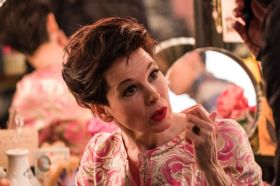 The ‘Judy’ of the title is, of course, Judy Garland, and this rather downbeat film, directed by Rupert Goold and written by Tom Edge, concentrates not on the gloss and glitter of Hollywood, but on a less-celebrated period of her life: her five-week residency at London’s Talk of the Town, which proved to be – quite literally – the end of her career.

It’s 1969, long after her super-stardom and more than a decade after her cinematic comeback with A Star is Born. Judy (Renée Zellweger) is struggling to make ends meet. Addicted to barbiturates and hopelessly in debt to the IRS, she is virtually unemployable in her homeland, reduced to dragging her children, Lorna and Joey, onstage with her to perform song and dance routines for a hundred dollars a night. Judy’s ex-husband, Sid Luft (Rufus Sewell) is understandably concerned for the welfare of his kids, but Judy is determined to prove herself a good mother, despite never having had the luxury of a decent role model in her own childhood.

But then the offer from Bernard Delfont (Michael Gambon) rears its head and, sensing a way out of the corner she’s painted herself into, Judy heads off to England, reluctantly leaving her children in the care of their father. There are problems from the moment she arrives: she refuses to rehearse for the show and keeps complaining of ‘headaches’- but her no-nonsense PA, Rosalyn Wilder (Jessie Buckley), does at least manage to get her onstage for the opening night. Judy goes down a storm and things look promising… but of course, as history attests, from there, it’s anything but plain sailing.

The first thing to say about Judy is that Zellweger is totally convincing in the lead role, nailing Garland’s tragic self-doubt and vulnerability with aplomb and somehow even managing to look and sound uncannily like the real person. But a great performance doesn’t automatically make a great film. That, I’m afraid, is more of a mixed bag.

I like the flashbacks to the Hollywood years, where young Judy (Darci Shaw) does battle with the odious Louis B. Mayer (Richard Cordery), a man who thinks nothing of working a twelve year old relentlessly around the clock, knowing full well that she has to exist on a diet of ‘pep pills’ in order to keep going. Later on, there’s also a charming plot strand where Garland befriends a couple of gay fans (Andy Nyman, Daniel Cerquira) and ends up back at their flat, cooking them an omelette, which makes them, I suppose, the original ‘friends of Dorothy.’

But unfortunately, so much of the narrative is devoted to Garland, the other characters barely get a look-in. The super-talented Jessie Buckley, for instance, is second-billed here, but we learn virtually nothing about Rosalyn; and why bother to employ the mighty Michael Gambon if all he gets to do is sit in the audience and look disgruntled? Finn Whittrock also struggles to make anything of his role as ‘unsuitable husband number five,’ Micky Deans. Was this man a cruel opportunist looking for his own personal rake-off? Was he just lousy at doing business? Did he have genuine affection for Judy? There’s not enough information here to let me make a judgement on any of those questions and that’s a shame.

Still, if, like me, you have a soft spot for the divine Ms Garland, this is worth catching for that sublime central performance. Zellweger does rousing versions of some of Judy’s best-remembered songs and manages to capture her distinctive vocal inflexions perfectly. And, unless you’re made of stone, you’ll probably have a tear in your eye at the film’s unexpectedly redemptive conclusion.