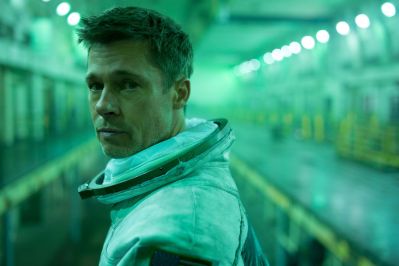 Imagine, if you will, that in Apocalypse Now, Captain Willard’s journey takes him not upriver to the dark heart of Vietnam, but out across the cosmos, to the Moon, Mars and ultimately Neptune – and you’ll have the essence of Ad Astra, a story about a son’s hazardous search for his lost father.

Roy McBride (Brad Pitt) is an astronaut famed for his self-control. In the film’s hair-raising opening sequence, he survives a terrifying near-death experience without so much as a discernible rise in his heart rate. But, capable though he undoubtedly is, that reserve has cost him his relationship with Eve (a barely glimpsed Liv Tyler), and he still suffers from the loss of his father, Clifford (Tommy Lee Jones), a pioneering space explorer last seen approaching Neptune and long presumed dead.

But, when a series of catastrophic power surges threatens the very existence of the universe, evidence emerges that Clifford might still be very much alive out there and, what’s more, he may have caused those power surges. Roy is given a thankless mission: to head out to Jupiter to reunite with his father and, if he can, to save the world from destruction (so no pressure there).

Director James Gray (who helmed the much-underrated Lost City of Z) has created a fascinating and original slice of science fiction. The film somehow manages to balance ravishing planet-scapes and nail-biting action set-pieces with slower, more cerebral stretches, concentrating on Roy’s internal conflict as that legendary self-control starts to break down. It’s a long journey and an eventful one, taking in a colonised moon with branches of Virgin Atlantic and Starbucks, an eerily silent space-buggy chase and, best of all, a sequence where Roy has to make a forced entry onto a spaceship, seconds before it blasts off from its launch pad.

As his quest progresses, he is increasingly confronted with a terrible realisation – that his long-missed father might not be quite the hero that Roy has always believed him to be. Pitt does an extraordinary job in the lead role, managing to emote so much from behind a permanently impassive mask; it’s probably a career-best performance from him and one that may well get a nod at next year’s Oscars.

That said, Ad Astra is surely destined to be a marmite movie. Those who turn up expecting a rollicking space adventure are in for a severe disappointment. Those seeking something more meaningful, however, are likely to have a very good time with this, particularly those who opt for the eyepopping majesty of an IMAX screening