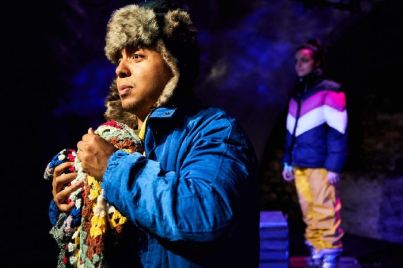 Thirteen-year-old Margaret (Phoebe Vigor) lives with her eight year old brother, Stanley (Zak Douglas), and their troubled parents in a tiny Yupik community in the wilds of Alaska. Global warming is gradually destroying their traditional way of life. The melting tundra threatens to plunge the family’s modest home into the ever rising river – and, because of a landslide that coincided with his birth, Stanley has always thought himself responsible for this catastrophic change.

The goverment has plans to rehouse them further inland but Margaret repeatedly tells Stanley that, when summer comes and the geese return, the two of them will run away to Anchorage, the nearest city of any size, where they will enjoy all the comforts of capitalism: Starbucks coffee, central heating, cinemas and unlimited wi fi…

But, as we learn in a beautifully judged flash-forward, things don’t always turn out as expected. And Margaret’s anticipated pleasures come at a terrible cost.

This delightful, enviromentally-conscious two-hander by Tallulah Brown, tells a poignant story, yet also manages to give a stark warning about the impending disaster that awaits our planet. The two adult actors skilfully embody their young characters (Douglas in particular has a face that uncannily belies his years) and the poignant scene where the two of them meet up years later is genuinely heartbreaking.  I previously knew nothing about the indigenous communities of Alaska but, after watching this, I intend to find out more.

Meanwhile, this charming play provides a heartfelt introduction to their plight.