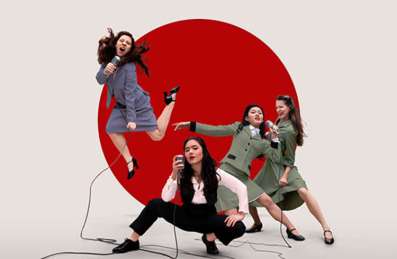 This lively, 40s themed musical tells the true story of Iva Toguri d’Aquino. Never heard of her? Well, hers is an intriguing story.

Of Japanese descent, Iva was born and raised in California but, in 1941, was asked by her mother to go to Japan to  help her ailing aunt recover from illness. While Iva was there, Pearl Harbour was attacked and America and Japan were suddenly at war with each other. She tried to leave the country but, because the State Department had failed to arrange a passport for her visit, she was prevented from returning to her homeland. Pressured to renounce her American citizenship, she refused.

Against her will, Iva was recruited by The Zero Hour, a radio programme designed to demoralise the American troops that tuned in to listen to it – though the show’s director, Major Charles Cousins, could only persuade her to join by insisting that he had cunning methods to ensure that no anti-American propaganda would ever go out. Iva’s contributions were minimal (she did occasional broadcasts calling herself Little Orphan Anne) but, in 1949, when the war ended, she returned to America, only to find herself accused of treason, identified as the mythical Tokyo Rose.

The story is told through song and movement and it’s beautifully put together, Hannah Benson’s direction ensuring that it moves smoothly from scene to scene using a few well chosen props. Maya Britto is adorable as Iva, her expressions registering her helpless astonishment as her defence crumbles beneath the racially-motivated slurs of the prosecution. Lucy Park, Yuki Sutton, Cara Baldwin and Hannah Benson play a host of supporting roles, flitting effortlessly from character to character – and because this is a complicated tale, the large captioning screen at the side of the stage is helpful even for those of us without a hearing impairment. If I have a nitpick, I’d like to see dialogue spoken rather than sung, just to offer something in the way of contrast – but it’s not a deal-breaker.

Playing to a packed house and sending audiences out on a high, Tokyo Rose is a delight. It also illuminates a fascinating (and little known) story from the Second World War.

Grab a ticket if you can, and strap yourselves in for a bumpy ride.