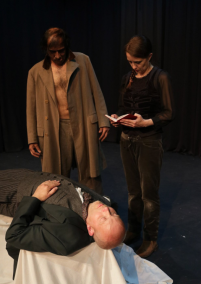 I love Frankenstein. I’ve read the novel so many times it’s as familiar as a friend. I love the story behind it too, and never fail to marvel at the nineteen-year-old girl who could produce such a masterpiece. Of course, I’m not alone. This slim volume has inspired all manner of creatives to explore its possibilities in other forms, and now it’s Birmingham-based Blue Orange Theatre’s turn to have a go. What can they add to the mix?

Frankenstein is played here as a three-hander, focusing on The Creature’s story, with Taresh Solanki delivering an impressive performance as the protagonist. He’s all tension and sinew: a feral, frightened beast. Once in the proximity of humans, he begins to emulate their behaviour, and Solanki’s movements change accordingly: he grows more upright, his language skills develop. The physicality of the transformation is arresting.

James Nicholas and Emma Cooper embody all the other roles, taking turns to narrate the story as the action unfolds. I like the way the narration switches from third person to first as The Creature learns to speak, and the way all three performers inhabit the small stage. Between them, they do the novel proud.

Frankenstein, told this way, is an ideal piece for the Fringe, where a few simple props, some wooden crates and a white sheet can evoke an entire world.