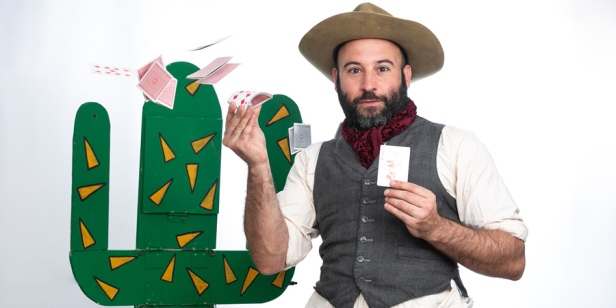 Of all the movie genres that are regularly spoofed for comic effect, the Western is perhaps the one that’s most ripe with potential. Gun is a comedy monologue, written and performed by Will Hartley, formally one quarter of the Clever Peter sketch troupe, in which he gamely takes on twenty-five characters, with little more than a battered Stetson and some extremely ropey scenery to back him up.

There’s an amiable, ramshackle quality to this piece, that only serves to add to the general hilarity. When Hartley manages to inadvertently knock over some of the aforementioned cardboard scenery, the moment is gleefully incorporated into the narrative – and when, in a later scene, there’s a four way shootout to enact, Hartley rises magnificently to the occasion, snapping from one character to the next, ensuring that we’re never in any doubt as to who is shooting whom – and why.

Meanwhile, Western buffs will have a field day spotting the various cinematic references – with an Ennio Morricone-style music cue here and a Clint Eastwood cliché there. There’s little point in going into the convoluted storyline; suffice to say there are few Western tropes left undisturbed. Hartley cleverly works the titles of scores of iconic movies into his script and, as the story unfolds, I find myself ticking them off in an imaginary box in my head. A climactic sequence, where Hartley is obliged to enact a torrid sex scene with himself, is a particular delight.

While it’s not designed to linger long in the memory, Gun is an ideal vehicle for those audiences looking for a good old belly laugh. Why not mosey on down to the Assembly Rooms and grab yourself a fist full of giggles?