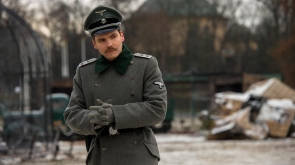 Like so many recent movies, The Zookeeper’s Wife is based upon a true story, even if closer examination quickly reveals that (as ever) several major liberties have been taken with the facts in order to dramatise the proceedings. But there is a remarkable tale at the heart of this film and it’s evident that Atonina and Jan Zabinski were an extraordinarily brave couple, who really did risk their lives in order to save those of around three hundred Jewish people during the Second World War.

The film opens in 1939, when Antonia (Jessica Chastaine) and her husband, Jan (Johan Heldenbergh), are the proud owners of the Warsaw Zoo. There’s an idyllic, chocolate-boxy feel to the early scenes, as Antonina pedals cheerfully around the zoo grounds dispensing love and care to the resident creatures – doubtless intended to contrast with the grim realities to come. And come they do, because, of course, pretty soon Warsaw has been invaded by the German army and the zoo devastated by bombing raids.  An acquaintance of the Zabinskis, German zoologist (and Nazi) Lutz Heck (Daniel Bruhl), offers to take the zoo’s rarer species to Germany ‘for safe keeping’. He also exhibits evident romantic interest in Antonina.

The Zabinskis consequently decide to exploit this interest by offering to turn their zoo into a massive pig farm, using the resulting meat to feed the German troops, something that Heck happily agrees to – but the couple are secretly planning to use the extensive cellars of their zoo to hide Jews, smuggled from the nearby ghetto, in order to help them escape to freedom. It’s a reckless ambition and one that’ll expose them to considerable danger…

This is a decent and perfectly watchable film, built around a strong performance by Chastain in the central role but – even though the story incorporates some devastating events: the heartless rape of a young Jewish girl; the callous murder of two other women;  the desperate plight of Warsaw’s Jewish population – the film never quite manages to generate the emotional power you’d expect from a story like this. I feel somehow distanced from the onscreen horrors and that is a problem.

Still, this is nonetheless an interesting tale plucked from the pages of history, and the courage of the Zabinskis deserves to be celebrated. The good news is the film is available to watch right now on Netflix.