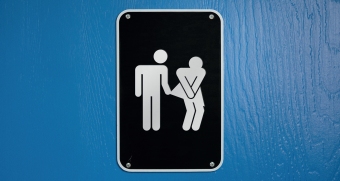 Donald Trump’s infamous “you can grab ’em by the pussy” brag caused international outrage: protest marches, column inches, pundits decrying him. But it didn’t cost him anything. The dismissal of his misogyny as “locker room talk” clearly resonated with voters, and he was duly elected president. What chance did Hillary ever have in such a toxic environment?

Gary McNair’s play, Locker Room Talk, is a direct response to this. Are Trump’s words really just banter, typical of what men say when women aren’t around to hear them?  If so, what does that tell us? And what should we do?

McNair set off with a voice recorder, and interviewed a lot of men. The result is an hour-long verbatim piece, performed – crucially – by four women (Maureen Carr, Jamie Marie, Nicola Roy and Gabriel Quigley), each wearing an earpiece and repeating the men’s words exactly as they hear them.

It’s chilling, listening to these words spoken by their subjects, squirm-inducing to hear women articulating the sexism that’s directed against them. The men’s voices are diverse, covering different socio-economic and age groups. But they’re united in their reductive brutality; their points-scoring systems; their adherence to stereotypes of women as sex objects, nags or domestic chore-doers. Spoken by women, the dark underbelly of the badinage is fatally exposed. The performances are stark and illuminating, the portrayals clever and detailed.

Of course this is heavily edited, the most vile and disparaging responses selected for impact. Of course the questions are leading, the responses shaped by what the participants think the interviewer wants to hear. And, of course, there are lots of men out there who’d never dream of saying things like these. But none of this matters here: it’s not a scientific study or academic research; it’s a play, a snapshot of how some men – too many men – talk about women. As a provocation, it’s perfect. We have to challenge this kind of talk; it isn’t good for anyone.

The question and answer session, expertly facilitated by Dr Holly Davis, is billed as a “post-show discussion” but, actually, it’s very much part of the play. This is the point, I think: to stimulate dialogue, to find a way forward.

Because it’s not okay to boast about “grabbing pussies” – is it?