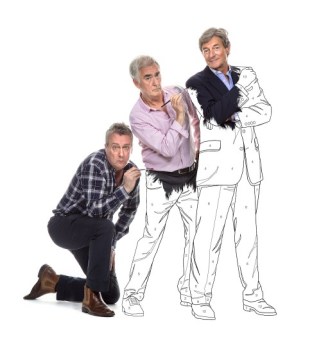 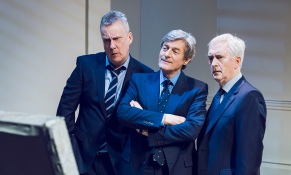 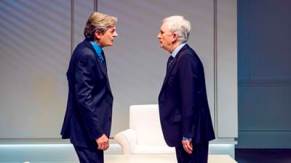 I’ve been going to the theatre for a very long time now and, over the years, I must have seen literally thousands of productions.

But I’ve never seen Art. Which is faintly puzzling when you consider how ubiquitous this clever three-hander is. Written by French playwright Yasmina Reza and translated by Christopher Hampton, it first hit the UK in 1996, and enjoyed a residence at London’s Wyndham Theatre that lasted for eight years. Since then, it has had many revivals in a variety of locations and featured a whole host of celebrity names. But, for whatever reasons, I have somehow comprehensively failed to catch up with it – so this touring production from the Old Vic provides an ideal opportunity to rectify the situation.

Serge (Nigel Havers) has recently bought a painting, an original by a much celebrated contemporary artist. What’s more, he has paid two hundred thousand pounds for it, much to the disgust of his long-time friend, Marc (Dennis Lawson). When he looks at the picture, all he can see is a large white rectangle, which he immediately brands as a piece of ‘white merde.’ Marc wants Serge to admit that he’s been duped and, to this end, he enlists the help of their mutual friend Yvan (Stephen Tompkinson, in what is arguably the play’s showiest role) to convince Serge of his mistake. Yvan is one of those mild-mannered souls who basically wants to please everybody all of the time, so it’s a delight to watch as he attempts to walk a precarious tightrope strung between his two best friends’ unshakeable egos. There’s one nervy extended monologue from him that earns a round of applause all of its own.

This is a play about art, about how we perceive it in different ways. It is also, to some extent about class, but it’s mostly about friendship and the importance of having people we can trust. And how, oddly, our friends’ responses to a plain white canvas can feel uncomfortably personal, a judgement on us all.

As the three old friends embark on a doomed attempt to enjoy a night out, their various differences come looming like flotsam to the stormy surface and the result is fast, frenetic and very funny. There’s an extended silent sequence where the three men sit in Serge’s living room eating olives that is so perfectly delivered it has me in fits of laughter at every clink of an olive pit.

Don’t go the King’s expecting a slow, leisurely unfolding of the plot. This is a lean, lively sprint, peppered with witty dialogue and delivered by three seasoned actors who have clearly played these characters enough times to know them like old friends – which, in a way, is the raison d’être for seeing this.

It’s only taken me twenty-two years to catch up but I’m glad I’ve finally ticked this one off my ‘to see’ list. Don’t leave it as long as I have.