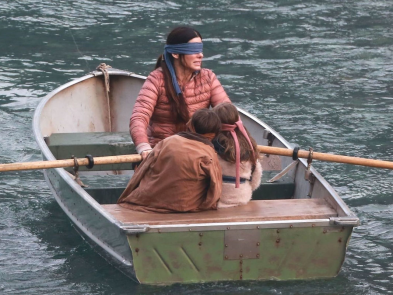 I’m not sure what to make of Netflix’s latest hit, Bird Box. On the one hand, it’s a decent little sensory-deprivation horror movie (is that a genre now?), nicely acted and directed, and it certainly takes me along for the ride. But on the other hand… well, there’s some pretty dodgy subtext here, and I’m not sure I want to overlook this stuff.

Sandra Bullock is Malorie, single and pregnant, ambivalent about impending motherhood. She wisecracks her way through her maternity appointments and avoids discussing crucial issues such as where a baby might be accommodated in her tiny artist’s studio. Of course she’s an artist: she has to work in a visual medium to underline the awfulness of what comes next.

Not that her art is ever mentioned again, once the mysterious beings arrive and begin their decimation of the human race. The conceit here is that ‘they’ can only get you if you look at them, but if you even catch a glimpse they’ll drive you to kill yourself. I like that director Susanne Bier never lets us see them ourselves, that their awfulness is left to our imaginations. But for the characters holed up in Greg (BD Wong)’s house, where they’ve fled in terror from the first attack, the beings are an ever-present threat, and survival is almost impossible.

There’s a great cast, featuring John Malkovich and Jacki Weaver, Sarah Paulson and Tom Hollander. Trevante Rhodes is Tom, and he’s a charming, likeable leading man. It’s always nice to see Parminder Nagra on screen, albeit this time in a minor role, as Malorie’s obstetrician. And the tension is palpable, even though the time-hopping structure means that we know from the beginning that Bullock ends up a lone adult, looking after two small kids, and pitting her wits against this unknown enemy.

… there’s the heavy-handed extended metaphor about motherhood to deal with: the implication that Malorie has to endure all this heartbreak and struggle in order to accept her true calling as a mother; that her earlier consideration of adoption for her baby could never really have been the right answer.

And the depiction of people with mental health issues is problematic too. ‘They’ (because they’re different from ‘us,’ right?) don’t commit suicide when they see the beings; they become converts to the beings’ cause, committed missionaries, cajoling and persuading as many people as possible to take off their blindfolds and see the light. It’s unsettling, actually, to see such a toe-curling division drawn between the sane and the insane; I thought we understood things better than that now.

So, on the surface, a fun way to pass an evening. But it doesn’t really bear much scrutiny. If you really want to see something in this ‘genre,’ A Quiet Place is far superior.