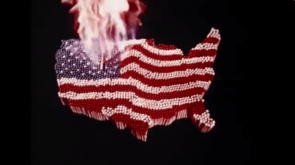 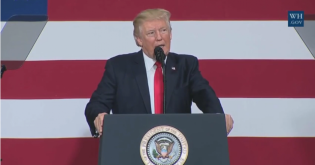 It’s rare that I emerge from a cinema shaking with anger, but that is exactly how I feel after watching Michael Moore’s latest offering, Fahrenheit 11/9. As you’ll doubtless surmise from the title, it’s his investigation of the phenomenon of ‘President’ Donald Trump. But it’s actually much more than that. This is a documentary that questions the very existence of democracy itself, demonstrating again and again that, in contemporary America, the original meaning of the word has been consistently devalued until it is nothing more than a hollow shell, a travesty of its former self.

The film has been accused by many as being ‘scattershot,’ but I don’t believe it is. True, it  examines a whole range of topics, but they are expertly drawn together to illustrate one central point: Moore’s belief that his country is fatally wounded and rapidly expiring. It is, if anything, a prolonged howl of anger and remorse. ‘How could this happen?’ Moore asks us, repeatedly. ‘How could it be allowed to happen?’

Sure, he takes in the rise of Trump, comparing it to the ascent of the Nazi party in Germany after the First World War, even going so far as to show footage of one of the Fuhrer’s rallies overlaid with lines from Trump’s speeches. It ought to be a cheap shot, but I’m afraid it works all too convincingly.  He also offers footage of Trump in earlier times, where the clues to his repugnant personality were already there for all to see.

Moore returns to the situation in his hometown of Flint, Michigan, the subject of his first film, Roger & Me in 1989, where the mostly black inhabitants were (and unbelievably, still are) being forced to use a water supply that is contaminated with lead. (There is a clean water supply available but it’s reserved… for washing engine parts.)

It looks at the recent situation where teachers – fed up with being paid peanuts and irate at being obliged to demonstrate their fitness regime in order to access healthcare –  were obliged to instigate a strike in order to receive better treatment. And it looks at the Parkland School shooting where pupils came together to protest about what happened and managed to mobilise huge rallies across America. It’s only in these two areas that we are offered any rays of hope, the proof that ordinary people can effect change if they get off their backsides and do something – but, as Moore observes in an early scene, there are over a hundred million Americans who don’t even bother to vote. And why would they, when they look at the sorry cavalcade of greedy, self-serving capitalists that are trotted out as candidates?

This doesn’t make for a pleasant trip to the cinema. It’s a shocking, excoriating journey to the dark side and, worst of all, it isn’t a slice of dystopian fiction: this is happening, right now – in the place that likes to boast that it’s ‘the land of the free.’

If you want a fuller picture of what’s really happening to democracy in the USA, I urge you to go and see this film. But don’t expect an easy ride.