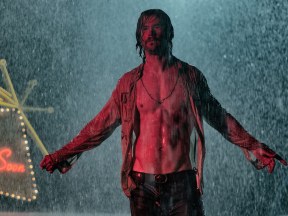 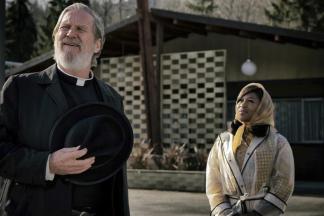 Drew Goddard has made his name mostly as a writer on various projects over the years with only 2012’s The Cabin in the Woods under his directorial hand. With Bad Times at the El Royale, he finally goes the full Orson Welles: writing, producing, directing – and no doubt making the tea whenever he has a spare moment.

It’s clear from the get go that this is a true labour of love and, what’s more, a considerable cinematic achievement. The film looks absolutely stunning and its multilayered characterisations and linking narratives recall Paul Thomas Anderson’s work on the equally labyrinthine Magnolia. Praise indeed.

The story opens in 1959 in a room of the titular hotel, where something mysterious and very film noir kicks off the proceedings with a loud gunshot. We then cut to the same location, ten years later. The El Royale is situated slap bang on the border between sunny California and dusty Nevada – indeed, a red line runs through the lobby and guests can choose to stay in their preferred state, so long as they agree to abide by its rules. A disparate group of travellers book themselves in for the night. They comprise shambolic priest, Father Flynn (Jeff Bridges), angel-voiced pop singer, Darlene Sweet (Cynthia Erivo), loud-mouthed vacuum cleaner salesman, Laramie Seymour (John Hamm), and the mysterious and sullen Emily Summerspring (Dakota Johnson). They are greeted by the hotel’s lone employee, Miles Miller (Lewis Pullman), who, after delivering a well-rehearsed introduction, assigns them to their various rooms.

It soon becomes clear that hardly any of the guests are quite what they seem – and that the hotel too has many dark secrets to be uncovered. Indeed, the story has so many fascinating twists and turns, it makes it difficult to relate much in the way of plot without risking major spoilers. Suffice to say that Goddard’s masterful script is packed full of genuine surprises. Just when I think I know where I am, he gleefully pulls the rug from under me, again and again. And each time I fall for it. Every occupied room number is assigned a title header – think of them, if you will, as chapters – and there is much about this film that makes me think of great books rather than films.

At two hours and twenty one minutes, Goddard is clearly happy to take his own sweet time to let his characters fully develop; indeed, it’s a good forty minutes before we even get so much as a glimpse of  the Charles Manson-esque, Billy Lee (Chris Hemsworth), and it’s only in the film’s final stretches that he comes swaggering into the action, dispensing violent retribution to whoever is unlucky enough to cross his path.

This is simply glorious filmmaking and if there’s a more intelligent thriller this year, I’d love to have it pointed out to me. Bridges is terrific (let’s face it, he always is) but it’s Erivo as the quietly determined Darlene who is the true revelation here, her presence absolutely illuminating every frame she’s in. There’s a superb soundtrack of Motown classics (with a little Deep Purple to emphasise Billy Lee’s satanic connections) and, despite the complexity of those interweaving stories, complete with various flashbacks to earlier days, I never have any questions left unanswered.

There aren’t many people in the viewing I attend and that’s a real shame. Sadly, films of this quality don’t come around too often.

My advice? See it now, before it’s gone. That gorgeous cinematography won’t look half as ravishing on the small screen.