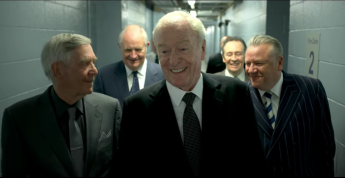 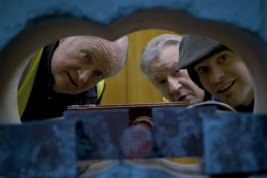 The Hatton Garden safe deposit burglary of April 2015 was always destined to be a contender for big screen dramatisation. This intriguing story, about a bunch of crooked old age pensioners who somehow manage to pull off the biggest theft in history, sounds promising enough on paper and, just three short years after the event, here’s the film, directed by James ‘The Theory of Everything‘ Marsh and boasting a clutch of revered veteran actors in the leading roles. What could possibly go wrong? But what promises to be a cracking crime drama turns out to be more of a mystery movie – the biggest mystery of all being who ever thought this script was ready to go before the cameras. I hate to say it, but this is criminal in the worst sense of the word.

Michael Caine plays Brian Reader, former money launderer, now going straight mostly due to the influence of his wife, Lyn. Played by Francesca Annis, she is the only female to get any lines in this film. Make the most of them, because within minutes of the opening, she is brown bread, Brian is lonely and he’s suddenly open to interesting offers. When a mysterious young man named Basil approaches him proposing one last job, Brian decides to pull together a bunch of his old cronies and go along with the idea. Yes, they’re going to rob Hatton Garden, but guess what? Basil has a key to the building, which somebody lent him ages ago and then forgot about (I know – don’t ask).

Soon Brian has his crew in place. They are Terry Perkins (Jim Broadbent), ‘Kenny’ Collins (Tom Courtenay), Carl Wood (Paul Whitehouse) and Danny James (Ray Winstone). Kenny also brings in his regular fence, Billy ‘the Fish’ Lincoln (Michael Gambon), who he thinks will come in very handy when they’re trying to dispose of stolen diamonds. Getting into the building turns out to be deceptively easy, but of course, no heist ever goes exactly to plan…

You’d think the biggest obstacle in the crooks’ way would be the brick wall they have to drill through but, trust me, this is nothing when compared to the film’s plodding script. It tries to be a treatise on the indignities of ageing but, instead, seems happy enough to have the thieves sitting around complaining about their respective ailments, or how they can’t figure out how to use the internet. Seriously, if you’ve managed to pull together such a complement of respected actors, it might be a good idea to give them some witty dialogue to deliver, but there’s never any danger of that. It’s hard to describe the dismal feeling of watching the great Michael Gambon reduced to the role of an incontinent fish seller, whose few words of dialogue mostly begin with the letter F. Likewise, Jim Broadbent is generally a delight on screen, but who decided to ask him to play a hard man? Courtenay’s character is deaf, which is hilarious in itself, right? And as for Winstone… well, let’s not even go there. Suffice to say this isn’t up there with his work on  Nil By Mouth.

It’s only close to the film’s conclusion where we get a glimpse of what this could have been,  a brief sequence where footage of each character is intercut with glimpses of the actors in their heyday. But it’s too little, too late – and, sadly, by the end of King of Thieves, it’s not just the vault wall that’s been bored.

You have been warned.