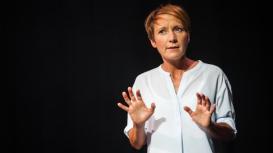 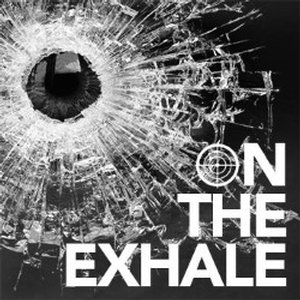 During the madness that is the Edinburgh Fringe, it would be all too easy to overlook the delights being offered at the city’s established theatres. On the face of it, On The Exhale,  written by Martin Zimmerman and directed by Christopher Haydon, seems perfectly engineered for festival audiences. This powerful monologue, brilliantly delivered by Polly Frame, was written in response to the Sandy Hook Elementary School shooting of 2012. It’s a searing examination of the subject of gun control and, unexpectedly, it’s also about the compelling seduction that deadly weapons can exert upon those who use them.

Frame plays an academic in an American University. In the play’s opening moments, she talks about her steadily building paranoia at the thought of one of her more headstrong students suddenly deciding to walk into her study with a firearm tucked into his waistband. She mentions the cool, clinical steps she is taking in order to prepare herself for such an awful eventuality, about what she will do in such dire circumstances. But, when tragedy does decide to rear its ugly head, the danger comes from an entirely different quarter…

The nature of the unfolding story is so important that it would be impossible to chronicle it in any more detail without giving too much away. Suffice to say that there are some genuine surprises here, the story heading from its initial premise into entirely unexpected areas. Frame is a compelling narrator, her vulnerability enhanced by the spare setting, which has her pacing barefoot through a tangle of fluorescent light fittings as she talks, the potential danger of a misplaced step all too evident.

As she draws us steadily deeper into her confidence, I find myself virtually holding my breath, not wanting to miss a single detail of her heartbreaking story. This is a masterful piece of theatre and my only regret is that I didn’t find time to see it earlier in the month. It’s on for just a few more days, so do take the opportunity to catch this while you still can.