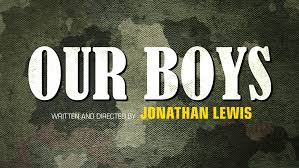 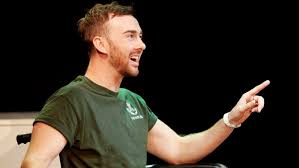 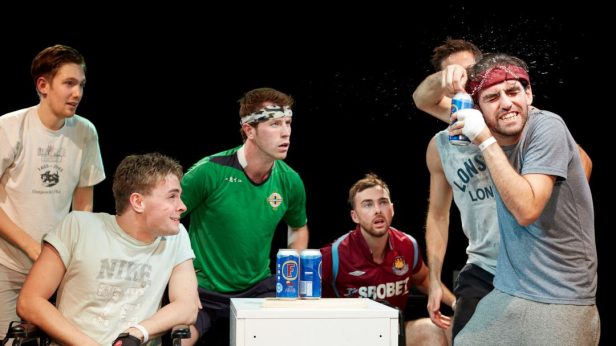 In the ward of a military hospital, a group of injured soldiers are recuperating from a variety of injuries. Keith (Christopher Lowry) is suffering from mysterious leg pains which the doctors seem unable to correctly diagnose. Ian (Michael Larcombe) has been so badly injured by a sniper’s bullet, he can barely form words. Parry (Charlie Quirke) has lost some toes, Mick (Alastair Natkiel) has recently been circumcised for ‘health reasons’, while Joe (Declan Perring), the longest serving inmate, sees himself as the wheeler-dealer of the group, forever wangling perks for the others, forever pulling strings on their behalf – and we do not learn what has actually happened to him for quite some time…

Into this powder keg limps Posh (Nick Seenstra), a young trainee officer currently suffering from the indignity of a pilonidal abscess. He is immediately seen as an outsider, a threat to the squaddies whose space he will now be sharing. Playwright Jonathan Lewis has first hand experience of the situation, having spent time himself in a military hospital in Woolwich.

This is an intensely masculine drama, where at times the levels of testosterone bubbling away onstage threaten to explode into the audience. Though it deals with the very serious issues of PTSD and the callous way in which disabled squaddies are casually tossed onto the scrapheap, it’s also periodically very funny. A sequence spoofing Robert De Niro’s The Deerhunter is hard to resist and so is the scene where the lads lay on a birthday party for Ian, only to discover – well, I won’t spoil it for you. It’s certainly not all laughs though. When somebody tips off the authorities about the presence of illegal alcohol on the ward, suspicion inevitably falls on Posh; of course he’s going to revert to type – he’s a would-be officer, right? But is he really to blame?

The performances here are all pretty good, though Natkiel’s Mick is a particular delight, forever managing to say the wrong thing at the wrong time in a wheedling Brummie accent. Be advised, this important play’s hard-hitting conclusion will surely send you out into the night with a lump in your throat and a tear in your eye.