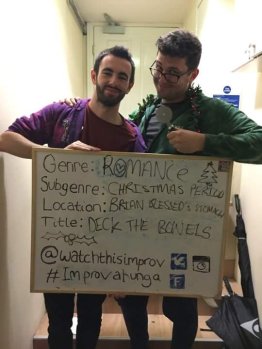 Throw a stone from anywhere on Edinburgh’s Royal Mile during the month of August and there’s a strong chance you’ll hit a member of an improv troupe. (Please note, that’s not an encouragement to actually try it!). Improv shows are always popular and, ironically, they’re a safe bet when trying to pick something from the thousands of possibilities offered on a daily basis at the Ed Fringe. ‘Ironically’ because, despite the proud boasts that no two shows are ever the same, we pretty much know the kind of thing we’re going to get.

Improvabunga! has been created by Birmingham University student group, Watch This! It’s advertised as a movie-inspired show, and every evening, as they queue outside, members of the audience are invited to write down a non-geographical location of a sheet of paper, one of which will be chosen at random. Once we’re seated and a location has been picked out of the hat (McDonalds tonight. Sorry folks, that was my idea!), we’re invited to shout out suggestions from a range of movie genres and a couple are selected. So, the theme of this evening’s show turns out to be a post apocalyptic/dystopian epic. Four buzzers are also handed out to people in the crowd. When one of them is pressed, the team have to drop everything they’re doing and launch into a pre-arranged task – a musical routine, for instance, or an inspiring speech. Meanwhile, a young chap seated at a keyboard provides suitable accompaniment for the resultng shennanigins. All good fun.

There’s no doubting the enthusiasm and energy that the young performers throw into this production and, if some performers shine more than others, and some scenes catch fire while others only smoulder, that’s only to be expected in this kind of show. Luckily, the troop are pretty adept at sensing when to move things along. There’s no doubting the hearty laughs coming from the audience. This is a pleasant if undemanding way to spend an evening at the Fringe.

But don’t write ‘McDonalds’ on your slip of paper. That was MY idea!