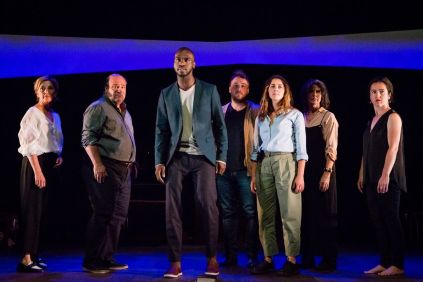 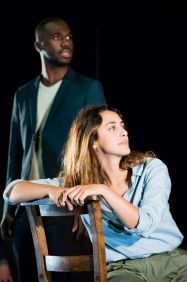 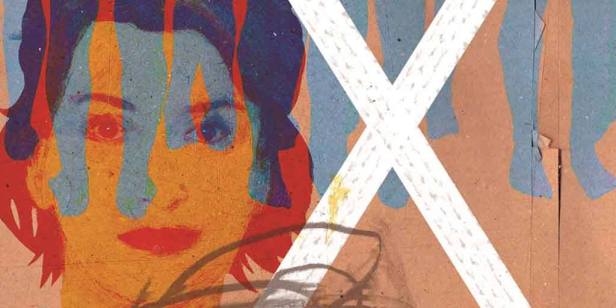 The press launches are pretty much done and dusted, the complimentary wine dutifully sipped, the introductions have all been made and now it’s eyes down for our first show of the Edinburgh Fringe 2018. Happily, it’s an auspicious start, an impressive and ambitious slice of theatre, a co-production between the National Theatre of Scotland, and Canada’s Theatre Pap and Hotel-Motel. In the interests of inclusivity, the piece is performed multi-lingually – in English, French and two different sign languages. If that suggests the results might be confusing, don’t worry – this is skilfully directed by Patrice Dubois and memorably acted by an ensemble cast.

Artist Isabelle (Isabelle Vincent) summons her family back to the ancestral home in Quebec. Her visitors include her daughters, Mina (Guillermina Kerwin) and Zoe (Zoe Tremblay), with Zoe’s Scots/Congolese boyfriend, Thierry (Thierry Mabonga), along for the ride. There’s also Isabelle’s conservative brother, Harry (Harry Standjofski), whose political views are anathema to the assembled crowd. Isabelle is keen to talk about the family’s future. After all, she’s seen her hopes for an independent Quebec dashed in the 1995 referendum and, more recently, her old friend Fletcher (Fletcher Mather)’s hopes of a ‘leave’ vote in Scotland have been similarly scuppered. Now the spectre of Brexit hangs over the UK. What does it mean for those who dare to dream of a different world?

Though the theme of family ties is uppermost here, it’s nonetheless a politically charged piece and the observation that people’s ambitions are so often dashed by cautious conservatism is eloquently told. From such an accomplished cast, it’s hard to single out an actor for particular praise, but I do relish Standjiofski’s turn as the snarky, sneering Harry, a man capable of offending everyone in the room with a single offhand remark.

With all those different ideologies under one roof – plus the presence of Isobel’s adoptive son, Francois (Francois Bernier), who fully expects to inherit the family home when Isabelle is gone – it’s only a matter of time before things come to a messy confrontation, which they do in spectacular fashion.

This is thought-provoking and prescient stuff – and, if it’s a portent of what to expect from the rest of this year’s Fringe, a very good sign indeed.