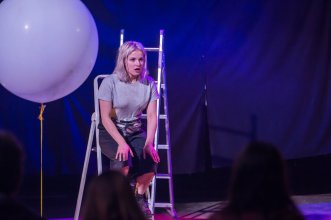 I shall begin this review with a question: who was the third astronaut who accompanied Neil Armstrong and Buzz Aldrin on their famous moon mission?  If you answer, ‘Mike Collins,’ well done. If you say that you haven’t the foggiest idea, well, you’re not alone. His name has pretty much disappeared from people’s memory, including mine.

We’re at the Hidden Door Festival and we’re here, specifically, to see Public Burning Theatre’s production of James Harker’s play, Voices From the Moon. We first became aware of Harker’s work through Manchester’s 24/7 Festival in 2015, where we really rated his poignant play Gary: A Love Story. And when we moved to Edinburgh, we told him that if he was ever up our way, he should get in touch…

Hence our visit to the gloriously ramshackle Hidden Door, where several very different offerings are taking place in a couple of semi-derelict buildings in Leith. The festival has managed to pull in a sizeable and enthusiastic crowd, but it quickly becomes apparent that organisation isn’t their strongest point. After a few mix-ups, we finally arrive at the right venue in time to watch the play.

It’s a monologue, the story of Steph (Steph Reynolds), confined to her bedroom by agoraphobia, where she has compiled a sizeable collection of books, tapes and videos concerning her main obsession – the NASA moon landing of July 1969. Meanwhile, she tries to apply herself to the idea of taking her own personal giant leap for mankind – convincing herself that she has the right stuff to actually set foot outside her Mother’s house. The parallels are clear – and Reynolds is a confident and appealing performer, who makes the best of playing a venue where the sound from another production taking place right next door is sometimes disconcertingly intrusive. I like the idea that Steph’s ‘Mother’ is in the audience tonight, her part played by an unsuspecting member of the public, but I am less keen on the staging of the play, which obliges Steph to constantly move three step ladders around in order to illustrate individual scenes – a device that occasionally feels distracting.

But the play shines through. Not only do I learn more about the moon landing than I had previously known – the name of that third astronaut, for example – I also find myself being increasingly drawn into Steph’s world and caring more and more about her disabling predicament.

Voices From the Moon is compelling stuff, confirming James Harker as a writer to look out for.