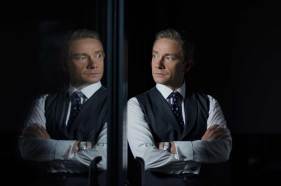 Anyone who was lucky enough to see the original theatre production of Ghost Stories will know that it was an accomplished exercise in rapidly mounting dread, with a brilliant conclusion that cleverly pulled the rug from under the audience’s collective feet. We saw it in 2011 and came away raving about it. The news that it was to be turned into a movie was obviously of interest, but as the release date approached, we did wonder if they could ever hope to replicate the unique look and feel of the original.

Well, since it’s both adapted and directed by its creators, Andy Nyman and Jeremy Dyson, it’s made a credible transition to the big screen and manages to generate almost unbearable levels of tension throughout, largely because the duo have taken heed of a universal truth – that what you only glimpse is far more unsettling than what the camera actually lingers on. In this deliciously old-fashioned British fright movie, Nyman plays Professor Philip Goodman, a man who has devoted his life to exposing fake mediums and debunking claims of supernatural experiences. But when he is contacted out-of-the-blue by one of his old heroes, Charles Cameron – another paranormal investigator and a man who seemingly disappeared without trace many years ago – he is intrigued enough to go along and meet him.

Cameron gives Goodman three unsolved cases to look into and challenges him to find a rational explanation for each of them. Using a classic portmanteau format, Goodman meets with the three men and hears their stories – they are Tony Matthews (Paul Whitehouse), a former nightwatchman, who experiences a terrifying evening at work; Simon Rifkind (Alex Lawther, for me, the stand out performance of the film) as a nervous youngster who has a run-in with something inexplicable on a quiet country road; and Mike Priddle (Martin Freeman), a successful businessman who discovers that the path to parenthood isn’t quite the joyful romp he anticipated. The film exploits its dark and dreary locations to great effect, largely thanks to the work of cinematographer Ole Brett Birkeland and effects palpable reactions to seemingly innocuous things – a cup of tea left in an open doorway, two people standing motionless at a kitchen sink, a pile of nappies that suddenly leaps from a table onto the floor…

The original ending has made it through intact and it’s here that I almost find myself wishing that I hadn’t seen the stage production, because, inevitably, I miss out on the chills that I experienced first time around. But perhaps that’s just silly, because I’m quite sure I’d be even more disappointed if they changed the ending.

Overall, this is a very strong and affecting slice of the supernatural. If there’s a criticism to be made (and there usually is), it’s simply that Ghost Stories is an overpoweringly white male production. The only female or POC roles on offer here are ‘blink and you’ll miss ’em’ jump scares – and in 2018, surely at least one of the main characters could have been reinterpreted?

This is not to detract from the film itself, which manages to hold me in a chilly embrace from start to finish. I also love the very clever marketing posters they are using to promote the film, currently adorning the sides of buses around the UK. Look more closely at them.

And don’t forget. The brain sees what it it wants to see.