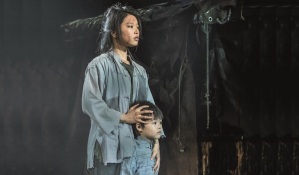 The story of Madame Butterfly first saw the light of day as a short story in 1898 and in 1904 became a celebrated opera by Puccini.

In their version of the tale, Boublil and Schonberg – creators of Les Miserables –  update the action to Saigon (as it was then called) in 1975, as American involvement in the Vietnamese war heads into a devastating tailspin. The result is Miss Saigon: an epic theatrical event, brilliantly staged, superbly performed and totally enthralling.

Kim (Sooha Kim) is a naive country girl on the run from an arranged marriage to Thuy (Gerald Santos), a man she does not love. Kim is quickly seized upon by ‘The Engineer’ (Red Concepcion), a cunning wheeler-dealer, currently earning his daily noodles by showing the visiting American troops a good time. Sex, drugs, whatever they want: he can provide it – for the right price. He is quick to realise Kim’s innocence could make him a lot of money. But when he teams her up with handsome young soldier Chris (Ashley Gilmour), something approaching true love blossoms between them. In the heat of the moment, they go through a traditional Vietnamese wedding ceremony. But then some devastating news comes through: the Americans are pulling out of the war and heading home. Chris is subsequently forced to leave the country without his new wife.

Okay, so it’s not the most original story in the world – there have been plenty of films and plays over the years that have trodden a similar path. What makes this work so effective is its epic sense of scale. There are thirty-eight actors working the stage in this production and they all give it everything they’ve got. The leads offer dazzling vocal performances – Kim and Gilmour are particularly strong, while Concepcion offers a mesmerising characterisation as a born survivor doing what he does best (his ‘American Dream’ set piece is a particular standout). The music, set design, costumes and movement are all of the highest standard and the show is as slick as quicksilver on a hot plate.

I must also single out one stunning coup de theatre, the final flight from the American Embassy, where the designers have somehow contrived to create a full scale helicopter hovering above the crowds gathered at the gates, a scene I watch in open-mouthed amazement. It shouldn’t be possible on a stage but it’s utterly convincing, a thrilling, eye-popping delight.

As for the story’s conclusion, I’m sure it can’t be construed as a spoiler if I warn you to take some paper hankies along with you. This is heartbreaking stuff and it’s a staunch soul indeed who will leave the Festival Theatre unmoved by what they’ve just seen. Many of the big blockbuster musicals fail to grip me, but Miss Saigon is a notable exception. I am riveted from start to finish.

Take my advice. Grab some tickets and buckle in for a wild ride. You won’t be disappointed.