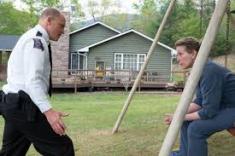 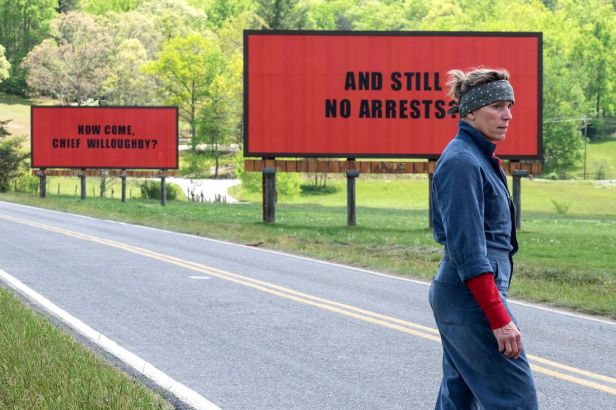 Martin McDonagh is an interesting writer/director. His plays are always stupendous and his first foray into cinema, In Bruges, is a five star solid gold masterpiece (and one, incidentally, that just won ‘best Christmas movie’ in our recent ‘World Cup of Everything’ game). The follow-up, however – Seven Psychopaths – wasn’t anything like as assured. Indeed, in a recent interview, McDonagh (with refreshing honesty in a business not usually associated with that sentiment) admits that he took his eye off the ball during the making of it. Now Three Billboards outside Ebbing, Missouri arrives amidst much muttering about potential Oscar wins. The truth is, it’s an interesting film but, sadly, not in the same league as In Bruges. Having said that, it’s still worth your consideration.

In the remote town of Ebbing, Mildred Hayes (Frances McDormand) rents three billboards on a lonely stretch of country road and has them papered with three simple slogans. It’s been seven months since her daughter, Angela, was raped and murdered and, enraged by the lack of any progress in the resulting police investigation, Mildred has decided to start pointing the finger of blame, primarily at Chief Willoughby (Woody Harrelson). He’s understandably miffed by this approach, particularly as he’s recently had a cancer diagnosis and knows that his days are numbered. But Mildred is not about to give up on her mission, even if it is set to make her and her son, Robbie (Lucas Hedges), the most unpopular people in the county. Meanwhile, openly racist policeman, Dixon (Sam Rockwell), is not above taking the law into his own hands…

As I said, this isn’t a perfect film but there’s plenty here to admire, not least McDormand’s searing performance in the lead role, brilliantly portraying a woman so obsessed with her daughter’s death that she’s willing to go to any lengths to obtain justice, no matter what the cost. Rockwell too, is splendid, managing to give his initially unsympathetic character some degree of redemption, and Harrelson delivers what just might be his best turn since Cheers. But there are plot strands here that don’t quite convince. Some of the minor characters are never fully developed and others seem to step in for one cracking scene and are never seen again. (I’m thinking here of the scene where Mildred exchanges some crackling dialogue with the town priest. It’s brilliant but it feels unresolved.) Likewise, Peter Dinklage’s turn as (as one character refers to him) ‘the town midget,’ a sweet-natured drunkard who carries a torch for Mildred. And is it just the presence of McDormand and that distinctive Carter Burwell score that make this feel eerily like an early Coen brothers movie?

Whether or not Oscar will come knocking for this film is debatable. Certainly if we’re talking ‘best actress,’ I for one wouldn’t be making any objections – I’ve long been of the opinion that McDormand is one of the best there is. But while this is a huge step up from Seven Psychopaths, it’s perhaps not quite the total masterpiece that many are claiming.