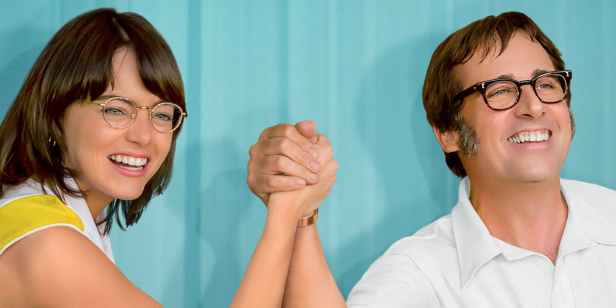 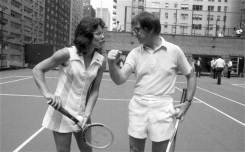 It’s the early 1970s and rising tennis star Billie Jean King (Emma Stone) is fighting to establish equal pay for female players. Why is it, she reasonably asks, that the men are being paid eight times as much as the women? American Lawn Tennis president Jack Kramer (Bill Pullman), tells her that it’s simply because the men are just ‘more interesting to watch.’ King’s answer is to pull all women players out of Kramer’s organisation and to help them to form their own, seeking sponsorship wherever they can find it. It’s mostly because of her unprecedented efforts that such appalling sexism in the sport was challenged and soundly defeated, even though it meant getting involved with some strange partners. A scene where Billie Jean’s agent, Gladys (Sarah Silverman) urges the players to smoke cigarettes because they are being sponsored by Philip Morris is a particular delight.

This fascinating film, scripted by The Full Monty’s Simon Beaufoy, is based around a real event in 1973, when King was goaded into playing a match against ex-champion player, Bobby Riggs (engagingly played here by Steve Carell), whose vociferous claim that no woman could ever beat a man at tennis, still resonates today – people are forever trying to push Andy Murray and Serena Williams into playing against each other. Beaufoy’s script cleverly displays the levels of inherent sexism that existed at the time – most of the remarks and attitudes of the commentators of the period now seem positively prehistoric. The film is aided by the fact that Stone and Carell look so convincing as their characters that genuine footage of the original match is used in long shot with the actors effortlessly spliced in for close-ups. Weirdly, although I already know the outcome of the game, the footage still somehow manages to generate considerable levels of suspense. For my money, this is perhaps the best attempt thus far to put my favourite sport up on the big screen.

The film is about more than just tennis, though. Riggs is struggling with personal demons – a powerful addiction to gambling is pushing his marriage to his socialite wife, Priscilla (Elizabeth Shue) onto the rocks – while King, married to the incredibly supportive Larry (Austin Stowells), finds herself irresistibly drawn to hairdresser, Marilyn Barnett (Andrea Riseborough). Their burgeoning romance is sensitively handled by directors Jonathan Dayton and Valerie Faris, who never fall into the trap of sensationalising it.

But perhaps what the film does best of all is to display the unbelievable levels of all-American razzmatazz that accompanied the contest, right down to Riggs being sponsored by a lollipop company called… wait for it… ‘Sugar Daddy.’ (And if you think the filmmakers have exaggerated for comic effect, you only need to glance at footage of the real event  to see that it has been reproduced with extraordinary attention to detail.)

It would be all too easy to paint Riggs as the villain of this piece, but he actually emerges as a likeable clown, whose outrageous comments are mostly done to generate interest (and large amounts of money) for the match. It’s the everyday, ingrained sexism of characters like Jack Kramer where the real problem lies – and it’s particularly satisfying to watch him get his comeuppance.

Do you need to be a tennis fan to enjoy this film? Well it certainly helps, but I don’t think it’s essential. Its powerful message about equal rights for everyone, regardless of their sexuality, rings out loud and clear. In tennis terms, this one serves an ace.