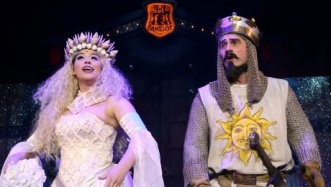 ‘Your father is a hamster and your mother smells of elderberries!’

With dialogue like that,  it can only be Monty Python’s Spamalot, the show that creator Eric Idle claims was ‘lovingly ripped off from the motion picture Monty Python and the Holy Grail. Since it opened on Broadway in 2005, this musical has played all over the world with a whole string of actors in the central role of King Arthur.

Tonight, in Edinburgh, Arthur is played by Bob Harms and his grubby assistant, Patsy, by Rhys Owen. From the moment they enter on horseback (or rather, on foot, accompanied by the sound of coconut shells) the audience is laughing helplessly, a state they remain in throughout the show. Lovers of Python – and they are many – will have a field day with this, because it features plenty of scenes from the film, together with songs specially composed for the musical (The Song That Goes Like This, which parodies the Andrew Lloyd Webber school of composition, is a particular standout) and, of course, since it’s simply too good to leave out, we are also treated to a version of Always Look On The Bright Side of Life from The Life of Brian, which has us all whistling happily along.

I won’t pretend this is anything more than a piece of fluff but, my goodness, what beautifully presented fluff! The production values here are spot on. Sarah Harlington as The Lady of the Lake submits some astonishing vocals and the various members of the chorus leap and pirouette around the stage for all they are worth. There’s also a fabulous moment where the fourth wall is well and truly broken. It would be a crime to reveal what actually happens but suffice to say one unsuspecting member of the audience is in for a real treat.

Was I entertained? Yes, massively. Could I tell you what the story is actually about? Well, no, but that’s kind of the point. Python always was a celebration of the ridiculous and Spamalot doesn’t change the formula all that much – so of course there are mystical knights desperately in search of a shrubbery. Of course there are interruptions from the voice of God (John Cleese). And of course there’s a killer rabbit – come on, it doesn’t get much better than a killer rabbit!

If you’re feeling a bit down or in need of a tonic, this show could be exactly what you are looking for. I came out with a great big grin on my face. Chances are, you will too.